Delhi, who were led to win by a super Super Over by Kagiso Rabada against the in-form Kolkata now take on Punjab, who overcame Mumbai thanks to their batting might

Delhi, who were led to win by a super Super Over by Kagiso Rabada against the in-form Kolkata now take on Punjab, who overcame Mumbai thanks to their batting might, in match number 13 of the Indian T20 on Monday.

Rabada defended a score of 10 against Kolkata in the Super Over with six yorkers, and will now face the challenge of taking on in-form batsmen like Chris Gayle, Lokesh Rahul, Mayank Agarwal, and David Miller.

Apart from Rabada, Prithvi Shaw was also brilliant for Delhi with 99 from 55 balls but his dismissal saw the batting crumble and Kolkata managed to take the match into the Super Over. This is something they would need to guard against. 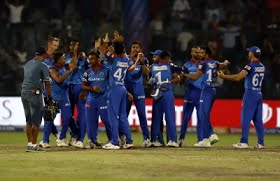 For Delhi, Shikhar Dhawan and Rishabh Pant have also been among the runs while skipper Shreyas Iyer is also s reliable bat. In the bowling, Ishant Sharma has been surprisingly good and they also have the likes of Trent Boult and Axar Patel to support Rabada.

Punjab, on the other hand, did very well to overcome Mumbai. Rahul played anchor with a 57-ball 72 after Gayle (40) again set things off before Agarwal finished off Mumbai with 43. There was also a dig at the Mankad as Krunal Pandya refused to run-out Agarwal.

Punjab might be a bit worried about their bowling as the likes of Mohammed Shami? Andrew Tye and Hardus Viljoen are not the most threatening as of now. A lot would continue to be expected of skipper Ashwin with the ball.