Delhi Capitals and Royal Challengers Bangalore will have to give it all they have in match number 55 of IPL 2020 at Abu Dhabi on Monday. Both DC and RCB are stuck on 14 points from 13 matches with four and three consecutive losses respectively. Whoever wins the contest will finish second on the points table while the losing side will have to battle it out with multiple sides stuck on 14, with the net run rate coming into the equation.

Delhi’s turnaround in the tournament, for worse, has been rather shocking. Their batting has completely come a cropper of late. Prithvi Shaw and Ajinkya Rahane have failed in the opening slot. And, even Shikhar Dhawan, has followed his two record hundreds with scores of 6,0,0. Everyone from skipper Shreyas Iyer, Shimron Hetmyer and Rishabh Pant to Marcus Stoinis have been unable to deliver.

DC’s bowling has been considered by many on par with Mumbai Indians’. However, Kagiso Rabada and Anrich Nortje have been slack in the last few games. Further, Ravichandran Ashwin and Tushar Deshpande too have been inconsistent while the rest of the bowling attack has kept changing. 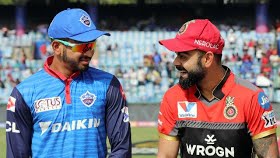 RCB too have lot of troubles to deal with. They have suffered three losses in a row, the most recent one coming against Sunrisers Hyderabad. With skipper Virat Kohli and AB de Villiers failing to fire in the last two games, Bangalore have had to pay heavily. Josh Philippe has been decent replacing Aaron Finch, but needs to get bigger scores, and support the prolific Devdutt Padikkal.

In the bowling, RCB have done reasonably well with the likes of Chris Morris, Mohammed Siraj and Isuru Udana all contributing. Navdeep Saini has only just come back from injury while the spin duo of Yuzvendra Chahal and Washington Sundar has excelled.

Head-to-Head Record: RCB have a 14-9 lead over DC. However, Delhi won the last match between the two sides by 59 runs.

The weather is getting cooler. Temperature will be in the high 20s for the evening game.