Virat Kohli (6/10): Starting with the captain. He got a hundred in the opening Test at Galle and a 70-plus in the second game, while failing in both innings in the third. 233 runs were decent returns. That said, he needs to work on converting hundreds into big scores. Also, his tendency to poke outside the off stump got him into trouble more than once. He was aggressive as captain, but his volatile temperament rubbed on to the team, which isn't a good sign.

Ravichandran Ashwin (9/10): He was the standout performer in the series for India, with 21 wickets averaging 18. He picked up five-for in both the first two Tests. While India lost at Galle, his effort bore fruit at the P. Sara Oval. He had the distinction of dismissing Kumar Sangakkara in all his last four innings. He returned to batting form with a crucial fifty at the SSC, and claimed four second-innings wickets to lead India to victory.

Ishant Sharma (8/10): Finally, he performed like India's strike bowler. He was consistent throughout, but came into his own in the deciding Test at the SSC, claiming 8 wickets to run through the Lankan batting. It was among the best performances by an Indian fast bowler in recent times. If only, he can temper his aggression a bit.

Cheteshwar Pujara (8/10): What a fantastic comeback Pujara made after a backdoor entry into the side. Opening the innings under extremely tough batting conditions at the SSC, he got a fighting hundred even as the team crumbled around him. Pujara's technique and temperament came to the fore during the match-defining knock. He got a unplayable ball in the second innings but had already done his job.

Amit Mishra (7/10): The leggie made a memorable comeback to the Test side, after four years in the wilderness. He was the joint second-highest wicket-taker with 15 scalps. He claimed seven wickets in the second Test, and displayed his all-round skills scoring 58 and 39 in the final Test.

Ajinkya Rahane (7/10): He was unlucky as India shunted him up and down the order to protect Rohit Sharma. While his technique at number three was found to be inefficient against the moving ball, he still managed a fluent century at the P. Sara Oval, in a match-winning cause. His catching was exceptional. He took a record 8 in the first Test, and continued his good catching form during the rest of the series. 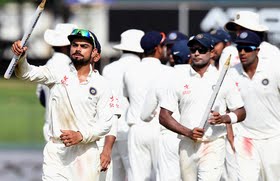 Rohit Sharma (5/10): As expected, he was sent in at number three at Galle. But, his technique stood exposed as he failed in both innings. He was swiftly moved down the order, and delivered fifties in the next two Tests. However, his affinity to lose concentration prior to breaks was exasperating. Also, he continued to give his wicket away after getting starts.

Shikhar Dhawan (8/10): The opener played in just the opening Test, and began with an impressive ton in the first innings at Galle, his second in as many Tests. He came out to bat with a swollen hand in the second innings, and was the only one to stick around. Needs to work on his fitness though.

Murali Vijay (7/10): Having missed the first Test, he replaced Dhawan in the second. Vijay looked rusty in the first innings as he was trapped lbw for a duck. But, he made a typical 82 in the second, to aid India's push for victory only to be ruled out of the third. Again, his fitness is a worry.

Lokesh Rahul (4/10): He got a hundred in the first innings of the second Test, but was a complete failure in the other games. His dismissals at the SSC, shouldering arms in both the innings were embarrassing, as was his catching, as he dropped more than he caught.

Stuart Binny (4/10): He continues to divide opinion. Chosen as the all-round option in the last two Tests, he played only one innings of note -- making 49 in the second innings at the SSC. With the ball, he managed a couple of crucial wickets in the first innings of the same Test. The debate over his Test spot is likely to continue.

Wriddhiman Saha (6/10): He featured in the first two Tests, and managed a half-century each in both. Did reasonably well as a replacement to MS Dhoni, and was good behind the stumps as well before getting injured.

Naman Ojha (4/10): At 32, Ojha was lucky to make his Test debut. He did not make a lot of mistakes behind the stumps, and contributed 29 and 35 in his two innings. Not bad returns, but he played poor slogs to be dismissed both times.

Umesh Yadav (4/10): Chosen over Varun Aaron for the second and third Test, Yadav played a good supporting role. Though he finished with only five wickets, he troubled the batsmen with his pace. Yadav also displayed marked improvements in his control.

Varun Aaron (2/10): He played only in the first Test at Galle, and was dropped as he managed only two wickets, without being impressive.

Harbhajan Singh (1/10): The veteran offie has possibly played his last Test. He only managed one wicket at Galle, and was nowhere close to threatening.