India's bowling has been surprisingly effective in Australia

Going into the 2015 World Cup in Australia and New Zealand, India had numerous concerns, but two of them were massive headaches. One was the completely wretched form of their opener Shikhar Dhawan, and second their poor, inexperienced bowling, which was taken to the cleaners in the

Going into the 2015 World Cup in Australia and New Zealand, India had numerous concerns, but two of them were massive headaches. One was the completely wretched form of their opener Shikhar Dhawan, and second their poor, inexperienced bowling, which was taken to the cleaners in the Tests as well as the tri-series. Rather surprisingly, these two weaknesses have suddenly turned out to be their strength in the first two matches of the World Cup, against Pakistan and South Africa at Adelaide and Melbourne respectively. Dhawan has hit prime form, while Indian bowlers have taken the team to two massive victories.

It must be said that India's bowlers, the pacers in particular, have been surprisingly effective in the first two matches. Considering the amount of inexperience in the bowling attack, it will remain their weak point in the tournament, especially against ruthless sides like Australia and New Zealand. But, with the kind of effort they have put into the first matches, the bowlers have definitely given India hope of brighter times ahead. The twin wins will give the Indian bowlers plenty of confidence as they head into bigger challenges. The tournament has only just begun, but getting things right early on in a big event is always a massive positive. 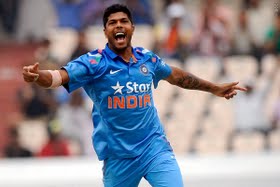 What has been most impressive about India's fast bowlers so far has been the pace at which they have bowled. Mohammed Shami and Umesh Yadav have made a concerted effort to bowl full-throttle, and take on the opposition batsmen. They have lost their line and length at times in the process, but the overall results have been highly encouraging. Shami, in particular, has been extremely impressive. His well-directed shorter one to Younis Khan, which caught the veteran batsman by surprise, set the tone of the tournament for India. Yadav's two wickets in one over against Pakistan also stood out.

The Indian bowlers carried on at Melbourne from where they had left off at Adelaide a week ago. Mohit Sharma also got into the action against South Africa. His delivery to dismiss Hashim Amla was a poignant moment in the match. Amla is a good player of the short ball, but he underestimated Sharma's pace, and was made to pay the price for the same. India have been fortunate that offie Ravichandran Ashwin has also raised his game notches higher. There were serious worries over how he would perform in Australia considering his poor overall record in the country. So far, he has done fine. The slower pace at which he has bowled has aided Ashwin in being more effective.

As of now things seem on the up for India. But, these are still early days for them in the tournament. There has been a similar pattern to their wins at Adelaide and Melbourne -- batting first, getting 300, putting pressure on the opponents, and then defending the total. It remains to be seen how Indian bowlers fare when they are put under pressure bowling first. Also, the Indian batsmen would be tested further when they themselves are made to chase 300 plus targets rather than setting them up. How they utilise the services of Stuart Binny in New Zealand conditions will also be a key factor. For a team to be crowned champions, they need to perform under all kinds of situations. Can India stand up to the varied challenges?