Kohli: Need to be smarter about how to compose team

Virat Kohli hit out at the middle-order after RCB went down to Rajasthan Royals, and thus crashed out of IPL 2018

Virat Kohli hit out at the middle-order after RCB went down to Rajasthan Royals, and thus crashed out of IPL 2018. Chasing 165, RCB were held to 134, their eighth loss in the tournament.

"Too much batting stress on just AB de Villiers. I thought we were in a great position at one stage. We were 75 for 1, the way we were bundled out after that wasn't ideal,” Kohli was quoted as telling Star Sports.

"A guy like AB, who has the ability to hit fours and sixes, was knocking it around. We needed more smart decision-making there and guys were just not up to the mark and that is disappointing to see. It's not something that should be repeated by five, six guys in a row,” Kohli added. 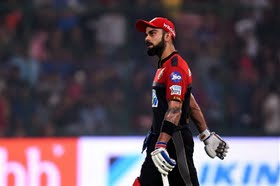 Kohli and de Villiers amassed 530 and 480 respectively. But, the middle order let the team down. "We wanted to strengthen the middle order that hasn't been our strength for the last few years. It's something we need to look forward to in the next season. We need to be more smart about how we compose our team, I guess,” Kohli further told Star Sports.