Sri Lanka were declared winners by 14 runs in their rain-affected Second ODI against New Zealand which was shifted from Colombo to Pallekele.

Sri Lanka were declared winners by 14 runs in their rain-affected Second ODI against New Zealand which was shifted from Colombo to Pallekele. This was the third straight game for the touring Kiwis that was hit by rain but for the first time a result was possible after some decent action.

Batting first after winning the toss, New Zealand put on a methodical display to post a healthy total of 250 for 6 in the allotted 50 overs. This was the first match under which the new ICC Rules came into play. Opener Rob Nicol scored 46 (from 74 balls) while putting on an 83-run stand for the 2nd wicket with Wicket Keeper BJ Watling (55 from 86 balls with 6 fours) to lay the foundation for the Kiwis. 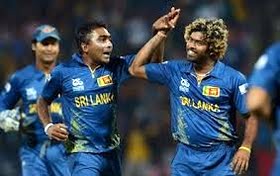 Skipper Ross Taylor played one of his best ODI knocks, scoring an entertaining 72 from 62 balls (with 7 fours and 2 sixes) and James Franklin chipped in with a 40-ball 35 to provide the finishing touches for the tourists. For the Lankans, slinger Lasith Malinga bowled on a tight leash with 2 for 39 in his 10 overs. Left-arm spinner Rangana Herath strangled the Kiwis completely with his 1 for 28 in 10 overs.

The Lankans got to 37 for 1 in 7 overs before rain held up play at Pallekele. The hosts recovered towards 118 for 3 in 22.5 overs before rain prevented any further action. Skipper Mahela Jayawardene until then was holding things nicely for the Lankans with his 43* (from 49 balls with 5 fours). As a result, Sri Lanka managed to stay well ahead of the D/L par score. Lasith Malinga was given the Man of the Match for his bowling efforts.