Sachin Tendulkar feels the current Indian side in South Africa is well balanced, and stands a decent chance of putting the hosts under pressure

Sachin Tendulkar feels the current Indian side in South Africa is well balanced, and stands a decent chance of putting the hosts under pressure.

“Virat Kohli will succeed if the team succeeds. Virat should just play his normal game and stick to the basics. The team should rally around him. India can only succeed if they can put up good totals. Runs will matter and not only Virat, but the entire team has to contribute. So, it’s not only about Virat Kohli,” Tendulkar was quoted as telling Hindustan Times.

The India legend also feels Pandya can be an asset in the team in South Africa. “In my 24 years with the Indian Test team we never had the balance this team has. The man who brings in such versatility is Hardik Pandya,” Tendulkar said. 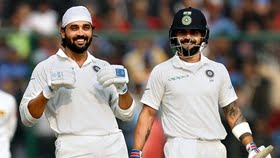 “A guy who can bowl 17-18 overs and is perfectly capable of scoring runs at No 7 or 8 is an asset. This is going to be Pandya’s biggest series and Virat will be banking on him,” Tendulkar further said.