A big day for Afghanistan cricket

A one-day international between Afghanistan and Australia? Yes, we are not joking, it is going to take place at Sharjah over two days – from August 25-26.

A one-day international between Afghanistan and Australia? Yes, we are not joking, it is going to take place at Sharjah over two days – from August 25-26. To avoid to scorching heat, the match will kick off at 6 pm local time and is scheduled to end early next morning, around 1:45, unless of course the Aussies finish off the game much earlier. There is little doubt that Australia will run away winners, but that fact that Afghanistan will be playing an international match against the Aussies in itself is a victory for the minnows, whose rise through the ranks has been one of the most remarkable and inspirational stories of the sport in recent times. 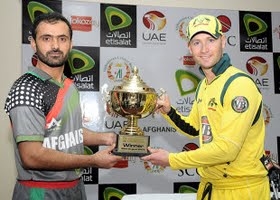 Afghanistan do not have big names or known ones since they are relatively new to the international scene. Even so, in captain Nawroz Mangal, they have a leader, who has earned the respect of his teammates. Also, the conditions at Sharjah might aid the spinners in the team to an extent. As such, legspinner Samiullah Shenwari, who has picked up the most wickets for Afghanistan in ODI’s, could come in handy. He also has the experience of playing in Sharjah before.

On the other hand, for Australia, this would be an opportunity to gain some confidence following the losses in England. They have had a tough winter so this would be a good chance for them to rewind, although they should be careful not to underestimate the Afghanistan side for, on their bad day, even the best of sides can succumb to weaker teams. Although, it is only a one-off game, the Aussies will be keen to put up a comprehensive display, for they pride themselves on giving their best in every game.

The game will mark the debut of Glenn Maxwell. He is known as a power-hitter in domestic cricket, and has played some whirlwind knocks. Apart from his batting prowess, he is an energetic fielder and can turn his arm over as well. It has been confirmed that Maxwell will play in the game, so he will be keen to make an impression. The other big news is that skipper Michael Clarke will bat at No.3. Australia have tried different players at the pivotal position, but haven’t found that stabilising influence. And so, while there is everything for Afghanistan to gain from the match, Australia too will look to make the game count for their own good in the future.