No Tamim Iqbal in Bangladesh Squad for Asia Cup 2012!

Bangladesh announce a 14-man squad for the Asia Cup 2012. Tamim Iqbal has been surprisingly ommitted from the side while Mashrafe Mortaza makes a comeback from a knee injury.

Hosts Bangladesh have named a 14-man squad for the next week’s Asia Cup 2012. Wicket Keeper Mushfiqur Rahim has been retained as the Captain. Former Captain Mashrafe Mortaza returns to the Bangladesh team after a gap of one year having recovered from a knee injury. Bangladesh have surprisingly omitted Tamim Iqbal, who is easily their best batsman after Shakib-Al-Hasan.

Interestingly, the Selectors claim that they had picked Tamim Iqbal in the team but his inclusion was rejected by the Bangladesh Cricket Board President Mustafa Kamal. Chief Selector and also Former Bangladesh Captain Akram Khan has quit from his position because of Mustafa Kamal’s decision in rejecting Tamim Iqbal’s inclusion in the squad. The talented 22-year-old Tamim Iqbal also happens to be the nephew of Akram Khan. 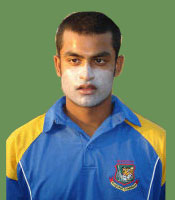 Also ignored in the Bangladesh team is Mohammad Ashraful, who at one stage was considered as one of the special talents in World Cricket. Ashraful has failed to live upto the expectations though and has even struggled to find a place in the Bangladeshi team of late. The other notable exclusion in the Bangladeshi side is that of all-rounder Naeem Islam, left-handed bat Shahriar Nafees, all-rounder Alok Kapali and fast bowler Rubel Hossain.