Virat Kohli had promised India wouldn't repeat their Pune performance at Bengaluru. They did perform better, but only just. If Steve O'Keefe was the hero at Pune, this time it was Nathan Lyon's turn to dazzle.

Virat Kohli had promised India wouldn't repeat their Pune performance at Bengaluru. They did perform better, but only just. If Steve O'Keefe was the hero at Pune, this time it was Nathan Lyon's turn to dazzle. The veteran Aussie off-spinner ran through the Indian batting line-up with amazing figures of 8 for 50, the best by any visiting bowler in India.

Lyon brilliant effort saw India being kept down to a mere 189. In response, Australia began their innings cautiously, but more significantly ensured they ended the day without any damage being done. Australia finished the day on 40 for no loss, with both David Warner and Matt Renshaw doing well to keep their wickets in tact. Australia now trail by merely 149 runs with all ten wickets in hand.

For the third consecutive time in the series, India's batting faltered. A lot depended on skipper Virat Kohli, who had a rare twin failure at Pune. But, the Indian skipper looked under unusual pressure, and was trapped lbw by Nathan Lyon, shouldering arms fatally for the second consecutive time. Ajinkya Rahane, the other big name in the Indian batting, continued his wretched run, going so far down the track that even a fumble could not enable him to get back into the crease. 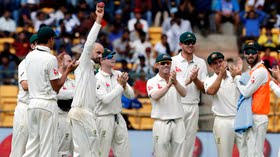 Karun Nair got his deserved chance with Jayant Yadav being dropped, but he too fell in similar fashion to Rahane, only this time it was the other spinner. Amidst the chaos struggled his way to 90, on his home ground, being given two lives. He was ninth man out looking for quick runs. India brought in Abhinav Mukund for the injured Murali Vijay, but Mitchell Starc trapped him quickly.

India went to tea at 168/5, and could have finished on a decent position had there been a couple of partnerships. Instead, they lost their last five wickets for 21 runs to hand Australia the upper hand, and perhaps have frittered away their best chance to win the series.