Australia have named a 14-man squad for the upcoming Commonwealth Bank Tri-Series which involves the hosts, India and Sri Lanka. Led by Michael Clarke, the 14-man squad will have the experienced Ricky Ponting, Michael Hussey and Brett Lee. Following the Vodafone Test Series against India, a couple of players in Shaun Marsh and Wicket Keeper Brad Haddin have been dropped for the CB Tri-Series because of their poor form. 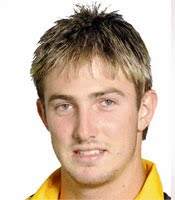 While Shaun Marsh failed to get going in the Test Series which results in his axing from the One Day Squad, his younger brother - Mitchell Marsh who bats aggressively and also bowls good fast medium has been selected in the 14-man Australia ODI Squad. All-rounder Shane Watson is yet to make a comeback after being laid down with hamstring and calf muscle injuries. Also missing from the Australian Squad is fast bowler James Pattinson who suffered an ankle injury after the Second Vodafone Test against India at Sydney.

The National Selectors have named rookie Peter Forrest, a 26-year-old middle order batsman from Queensland in the Australia ODI Squad in place of Shaun Marsh. The Wicket Keeper vacancy following the resting of Brad Haddin has gone to the 24-year-old Matthew Wade who had played 2 T20Is for the Aussies in South Africa last year.

The Selectors have not named a Vice-Captain with the absence of Brad Haddin and Shane Watson. However, it is likely that a deputy to Michael Clarke will be named when the Australia Squad assembles in Melbourne for the opening game of the CB Tri-Series which will be against India on February 5th.

Commenting on the Squad that they have selected for the Commonwealth Bank Triangular Series, National Selector - John Inverarity has said “We want a flying start to the Commonwealth Bank Series against India and Sri Lanka and as always, have selected a group we are confident can win while also keeping an eye on development for the future.” Inverarity also said “Peter Forrest, Mitchell Marsh, Matthew Wade, Dan Christian and Clint McKay are in form and will have a chance to either prove or further prove themselves on the international stage.”

There is also note on the squad with the 20-year-old all-rounder Mitchell Marsh expected to miss the first two matches of the CB Tri-Series to allow him to play in the BUPA Sheffield Shield match for Western Australia against Queensland. Mitchell’s older brother Shaun Marsh is also going to play in that game to regain his lost form.