Australia need Watson to stand up and deliver at Delhi

The Border Gavaskar Trophy is well and truly India’s now, but Australia would, without doubt, be keen on avoiding a 4-0 whitewash heading into Feroz Shah Kotla at Delhi. They pride themselves a lot on their performance irrespective of victory or defeat, and their efforts in the last three Tests would surely have disappointed the players as well as the fans big time.

The Border Gavaskar Trophy is well and truly India’s now, but Australia would, without doubt, be keen on avoiding a 4-0 whitewash heading into Feroz Shah Kotla at Delhi. They pride themselves a lot on their performance irrespective of victory or defeat, and their efforts in the last three Tests would surely have disappointed the players as well as the fans big time. Thus, heading into the fourth and final Test at Delhi, they would be at an all-time low. Many, including former Indian skipper Sourav Ganguly, have termed this Aussie outfit as the worst ever to visit India. They have a point for sure and, as such, it is difficult to imagine Australia avoiding a whitewash unless weather intervenes. 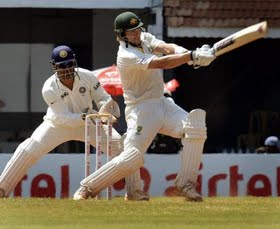 Still, if there is one man who can help turnaround Australia’s fortunes, it is their experienced all-rounder (who cannot bowl at present) Shane Watson. We all know the bizarre circumstances under which the Aussie vice-captain flew back to Australia (apart from his wife’s pregnancy of course). But Watson is among the seniormost players of the current squad, and thus will be expected to put all the unfortunate incidents that transpired in the build up to the Mohali Test beyond him. He will have to come out of all the mess, as only a truly professional player can do.

With captain Michael Clarke in doubt for the final Test owing to his recurring back injury, there might well be a somewhat ironical scenario wherein Watson, who was reprimanded by the coach Mickey Arthur for not doing his homework, leads the side in the Delhi Test. One can only wonder how Arthur and Watson would work together in such an arrangement. More significantly, irrespective of whether or not Watson is in charge of the side at Delhi, he must raise his game to inspire a downbeat squad.

Even though Watson was not part of the team that suffered its third consecutive defeat at Mohali, he was one of the culprits as Australia went down in the first two Tests as well without putting up much of a resistance. Watson was disappointing since he kept getting out after he got starts in most innings. It is not what you expect from one of your senior batsmen, Australia anyways have very few in their present outfit. The fact that Watson was not fit to bowl only accentuated the visitors’ woes.

Of course, it can be argued that cricket being a team game one man cannot change the fortunes of his team. At the same time, some of the Australian batsmen have found form. David Warner, Ed Cowan, Phillip Hughes and Steven Smith, all were among the runs at Mohali, which is a good sign for the Aussies, albeit one that has come belatedly. At the same time, if Watson can also join the party in Delhi, Australia may eventually manage to put some pressure on the Indians. Who knows, one great knock and Australia might well avert the whitewash that looks anything but inevitable.