In the first of the five-part series, we look back at five excellent Test victories achieved by India over England.

In the first of the five-part series, we look back at five excellent Test victories achieved by India over England.

The backdrop: The first two Tests of the series played at Lord’s and Old Trafford were drawn, as a result of which sides teams went into the deciding Test with a chance of winning the series.

How the game panned out

England won the toss and elected to field first. India got off to an excellent start in the Test, with Eknath Solkar sending back England opener Brian Luckhurst for one. However, England fought back very well thanks to a wonderful partnership between John Jameson and John Edrich. Following an alliance of 106, Edrich fell caught behind to Bishen Singh Bedi for 41. India continued to fight back with Keith Fletcher also being dismissed by Bedi. However, it was the wicked of Jameson, who was run out for 82 that brought India right back into the match.

At 143 for 5, India would have fancied their chances of bowling England out cheaply. However, there was another twist in the tale (read tail). After English skipper Ray Illingworth was bowled by Bhagwath Chandrasekhar for 11, Alan Knot and Richard Hutton joined hands to feature in an unprecedented fightback. Wicket-keeper Knot made a smashing 90 while Hutton cracked 81 as England recovered to post a challenging score of 355. For India, Solkar grabbed three wickets while the spin trio of Bedi, Chandrasekhar and Venkataraghavan snared three wickets each.

India did not do too well in reply, with Sunil Gavaskar and Ashok Mankad being packed up early, but batted well enough to stay in the hunt in case they get a second chance to try for a victory. The Indian innings was built around hard-fought knocks by Ajit Wadekar (48) and Dilip Sardesai (54). India’s lower order also put up a competitive show, with Solkar contributing 44 and Farokh Engineer scoring a highly important half-century. With some contribution from the tail as well, India managed to end their innings on a decent note, registering 284. 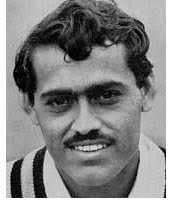 It was during England’s second innings that the game turned on its head, quite literally. In spite of having a sizeable lead, the home team couldn’t build up on the advantage gained. Chandrasekhar bowled an unplayable spell and, as a result, England were skittled out for a paltry 101. The leggie got the key wickets of Luckhurst (33), Edrich (0), Fletcher (0) andIllingworth (4). As a result of England’s collapse, India were set a highly gettable target of 173.

During India’s chase, England kept themselves in the hunt, dismissing Gavaskar (0), Mankad (11) and Wadekar (45) by the time the score touched 76. Following their dismissals, however, Sardesai and Vishwanath featured in match-winning partnership, with Sardesai contributing 40 and Vishwanath 33. Engineer ensured there were no flutters in the end with an unbeaten 28, as India won by four wickets.

For the record, this was India’s first Test match and series win in England.