Virat Kohli: Prepared to play all three formats for the next three years

India skipper Virat Kohli has revealed that he wants to play all three formats of the sport for the next three years, after which he will reassess the workload as he would be approaching his

India skipper Virat Kohli has revealed that he wants to play all three formats of the sport for the next three years, after which he will reassess the workload as he would be approaching his mid-30s. It will be pertinent to note here that India will be playing two World T20s and a 50-over World Cup during this period.

"My mindset is on the bigger picture as I prepare myself for a rigorous three years from now and after that, we might have a different conversation," Kohli said on being asked if he had thoughts of retiring from any format of the sport after the 2021 World T20. Kohli was speaking to the media ahead of the first Test at Wellington.

"At a time where the body can't take anymore, maybe when I am 34 or 35, we will have a different conversation. For the next two to three years I have no issues at all," he said. For Kohli, the crucial point is the 2023 World Cup, after which he knows that there won’t be much left in the tank. 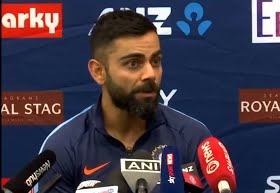 "I can keep going on with the same intensity and also understand that the team wants a lot of my contribution in the next two to three years so that I can ease into another transition that we faced five-six years ago," Kohli, rated as one of India’s greatest, stated. The transition Kohli is referring to the period following the near-simultaneous retirements of Sachin Tendulkar, Rahul Dravid, and VVS Laxman.

Kohli did not have any qualms about admitting that playing day in and day out over the last decade has definitely taken a toll on his body. "It's not a conversation you can hide away from in any manner. It is around eight years now that I have been playing 300 days a year, which includes traveling and practice sessions. And intensity is right up there all the time. It does take a toll on you," the Indian captain further added.

Kohli went on to explain why players who feature in all three formats must take periodic breaks to refresh themselves. "It's not that the players are not thinking about it all the time. We do choose to take a lot more breaks individually even though the schedule might not allow you to. Especially from guys, who play all the formats. It's not easy being captain, having that intensity in the practice sessions. It does take a toll on you. Periodic breaks seem to work pretty okay for me,” the 31-year-old opined.

Kohli also admitted that he rated the World Test Championship very highly. "I think World Test Championship as an ICC tournament should be right up there. All the other tournaments for me they start under that. This is probably the biggest of them all as every team wants to make it to the final at the Lord's. We are no different,” the captain’s of the No.1 Test team affirmed.