The left-hander raced to fifty off 23 deliveries and ended with 27-ball 62 as the hosts ended with 207. With the ball, Afghanistan's IPL debutant Rashid Khan, Bhuvneshwar Kumar and Ashish Nehra took six wickets among themselves RCB to 172 after they got off to an impressive start. 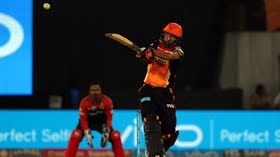 David Warner’s poor run of form continued for SRH. But, Yuvraj was in supreme form. And, along with help from Moises Henriques and Shikhar Dhawan at the top, they managed to cross 200.

Dhawan took on opposition skipper Shane Watson, hitting him for four boundaries in an over as the hosts reached 59 for 1 in the powerplay. Yuzvendra Chahal (1 for 22) was the only Bangalore player to impress?

Yuvraj slammed seven fours and three sixes, eventually fell in the 19th over. Henriques made a 37-ball 52 while Ben Cutting's cameo took them past 200.

RCB scored 54 in the powerplay with Chris Gayle and Mandeep Singh shining. But, both fell within six balls of each other. Travis Head and Kedar Jadhav put on a quick half-century stand. Jadhav eased to 30 off 15 but a direct hit by Ben Cutting from fine-leg had him run out. With the big names missing, the chase fizzled out.