On April 24, 2013, the legend name Sachin Ramesh Tendulkar turned 40. And while he has stopped playing one-dayers and T20s, he has showed no inclination towards hanging his boots as far as the longest version of the game is concerned.

On April 24, 2013, the legend name Sachin Ramesh Tendulkar turned 40. And while he has stopped playing one-dayers and T20s, he has showed no inclination towards hanging his boots as far as the longest version of the game is concerned. Having made his debut in November 1989 (the only active cricketer from the 80’s), Tendulkar has, till date, featured in 198 Tests and has amassed 15837 runs at an average of 53, with the aid of 51 tons and 67 fifties. Here’s a look at other cricketers who have played Tests after crossing the 40-mark in recent years.

Gordon Greenidge: The West Indian legend made his Test in 1974 against India at Bangalore, and retired in 1991 following a Test against arch-rivals Australia at St. John’s. In a career spanning 108 Tests, Greenidge amassed 7558 runs averaging 44.72 with 19 hundreds and 34 fifties. He registered his highest Test score of 226 in his penultimate Test, against Australia at Barbados in 1991. In an unbelievable coincidence, the former Windies opener turned 40 on the last day of his last Test. Greenidge made 93 and 107 on his debut Test and 6 and 43 in his last Test.

Dave Houghton: The great batsman from Zimbabwe, Houghton debuted in 1992 at Harare when Zimbabwe played their first ever Test, and retired in 1997, following a Test against New Zealand at Bulawayo. Houghton was 40 years and 98 days when he retired. In a wonderful career, he played 22 Tests and scored 1464 runs at a wonderful average of 43.05 with the help of four hundreds and four fifties. These figures also included a belligerent 266 against Sri Lanka in 1994/95. Captaining the side, Houghton blasted 121 and 41 in Zimbabwe’s debut Test. In his final five-day game, Houghton managed low scores of only 32 and 13.

Alec Stewart: The former England captain-cum-wicket-keeper was one of the fittest cricketers in the international arena during his playing days. This explains why he played his last Test aged 40 years and 153 days, against South Africa at The Oval in 2003. Stewart had made his debut 13 years earlier, against West Indies at Kingston in 1990. Having played a total of 133 matches, Stewart amassed 8463 runs at an average of just under 40, with 15 hundreds and 45 half-centuries. His highest score of 190 was made against Pakistan at Edgbaston in 1992. Stewart made 13 and 0 not out in his debut Test and 38 in his final Test, in the only innings he batted in. 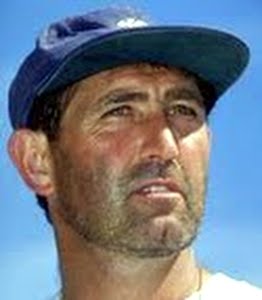 Graham Gooch: Another former England skipper, Gooch ended his Test career when he was 41 years and 199 years old. He made his Test debut against Australia at Birmingham in 1975 and played his last Test against the same opponent, at Perth in 1995. In 118 Tests, Gooch made 20 hundreds and 46 fifties, with that unforgettable 333 at Lord’s against India in 1990 being his highest. Gooch bagged a pair on debut and made 37 and 4 in his final Test.