The India-England Test series gets underway with the first Test in Rajkot on November 9. As a build-up, we look back at England’s last five visits to India. In our final part, we recap England’s tour of India in 2012. Four Tests were played during the series, which England won 2-1

The India-England Test series gets underway with the first Test in Rajkot on November 9. As a build-up, we look back at England’s last five visits to India. In our final part, we recap England’s tour of India in 2012. Four Tests were played during the series, which England won 2-1.

1st Test: The opening Test of the series was played from November 15 to 19 at Motera in Ahmedabad. India won the toss and chose to bat first. They posted 521 for 8 declared, built around Cheteshwar Pujara’s unbeaten 206. Virender Sehwag, who was struggling for runs, came up with a hundred, making 117 while Yuvraj Singh chipped in with 74. Graeme Swann picked up 5 for 144 for England. In reply, the visitors were rolled over for 191. Pragyan Ojha claimed five wickets and Ravichandran Ashwin three. 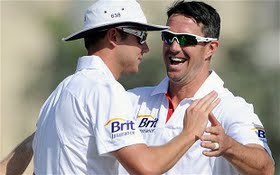 Following on, England made a much more impressive 406. Skipper Cook made a hard fought 176 while Matt Prior made 91. For India, Ojha and Umesh Yadav picked up four and three scalps each. India were chasing 77 to win, and got home by nine wickets.

2nd Test: The second Test was played in Mumbai from November 23-26. India won the toss, and chose to bat again. This time, they only managed to put up 327 on the board. Pujara again starred with 135 while Ashwin chipped in with 68 towards the end. Monty Panesar and Swann ran through the Indian innings, claiming nine wickets between themselves. England responded with 413, built around Kevin Pietersen’s memorable 186, and Cook’s 122. Ojha was India’s best bowler with 5 for 143.

In the second innings, India crumbled to 142 all out, Gautam Gambhir’s 65 being the only score of note. Panesar picked up 6 for 81, and Swann 4 for 43. Owing to India’s collapse, England were left with merely 57 to win the Test, and square the series. They got home with all ten wickets in hand. Pietersen bagged the man of the match.

3rd Test: The third Test of the series was played from December 5 to 9 at Kolkata. India decided to bat after winning the toss. The hosts again failed with the bat, and were held to 316. Tendulkar top scored with 76, Gambhir made 60 and Dhoni 52. Panesar and Anderson picked up four and three scalps respectively. England replied with a massive 523. Cook again led the way with a stubborn 190. Jonathan Trott also chipped in with 87. Ojha and Ashwin claimed four and three wickets, but went for plenty of runs.

India were rolled over for 247 in their second innings, in spite of a combative 91 by Ashwin. Anderson and Steven Finn did the damage with three wickets each. Needing only 41 to win, England lost three wickets, but the seven-wicket triumph gave them the series lead.

4th Test: The final Test was played at Nagpur from December 13-17. England won the toss, and batted first. They put up 330 on the board, Pietersen and Root making 73 each.

Piyush Chawla was the most successful Indian bowler with 4 for 69. England bowlers hit back to restrict India to 326. This, in spite of a hundred by Kohli’s and Dhoni’s 99. Anderson claimed 4 for 81, and Swann 3 for 76.

England declared their second innings on 352 for 4. Trott and Bell enjoyed themselves to easy hundreds. The match ended in a stale draw, but England were euphoric, having won the series 2-1. Anderson was the man of the match in the fourth Test while skipper Cook was named man of the series.