Even as all eyes were on Yuvraj Singh and Suresh Raina as they looked to stake claim for the number six position for the Tests against England, one man, not for the first time, and possibly not the last, reminded the Indian selectors that he too is around and should be considered.

Even as all eyes were on Yuvraj Singh and Suresh Raina as they looked to stake claim for the number six position for the Tests against England, one man, not for the first time, and possibly not the last, reminded the Indian selectors that he too is around and should be considered. That player we are talking about responds to the name of Manoj Tiwary, and it was his well-compiled, patient 93 that was the highlight of the opening day of the practice match between India A and the visiting English side. 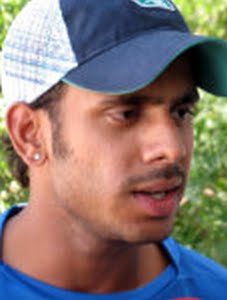 The case of Tiwary has been among the strangest ones in Indian cricket. For some inexplicable reason, he has never been preferred in playing XI even when the more illustrious names are struggling, this in spite of the fact that he has performed admirably whenever given the opportunities to prove his mettle. He came up with another mature knock on Tuesday at the Brabourne Stadium in Mumbai even as most of the other members of the India A squad struggled. Considering his consistent performances in domestic cricket over the years and even in the IPL, if that counts, Tiwary must consider himself the most unlucky cricketer on the Indian circuit at the moment.

Despite making his debut against Australia at Brisbane back in 2008, Tiwary has played only eight ODIs over a period of four years. Even in this brief phase, he has had his moments of glory, none bigger than the one-day century against West Indies last year. Strangely,he hasn’t been a permanent of the ODI squad even after that performance. There is thus no reason to believe that Tiwary will pip either Yuvraj or Raina for number six spot in the opening Test. However, if he is indeed given the nod, it would not be an unfair decision by any stretch of the imagination.

In case Tiwary gets selected out of the blue, it will mark a definite change in fortunes for a man who has seen a lot of ill-luck, and should have played much more international cricket by now, if his obvious talent is anything to go by. He was picked in the Indian squad for the tour of Bangladesh in 2007, but sadly injured his shoulder during fielding practice on the eve of match in Mirpur, which was supposed to mark his international debut. When he finally got his opportunity in early 2008 in Australia, he was completely out of sorts and was easily worked over by Brett Lee. As it has happened with so many youngsters, Tiwary was out of the reckoning for a while, and when he was recalled after a three-year break, he was ordered to open the innings, since one of the openers was in horrendous form. Not surprisingly, things did not work out either for him or Team India.

In a short stop-start career, Tiwary has already seen plenty of ups and downs. Hopefully, it will make him a hungrier cricketer when he finally gets a decent run on the big stage.