Unlike in one-dayers, where Bangladesh have been somewhat invincible at home in recent times, they still have a long way to go as far as their Test performance is concerned

Unlike in one-dayers, where Bangladesh have been somewhat invincible at home in recent times, they still have a long way to go as far as their Test performance is concerned. They have shown glimpses in recent times, but haven’t been good enough to finish off matches. The first Test against England was an addition to the so near yet so far list for the hosts. But, there was a significant improvement without doubt as the hosts competed with England tooth and nail. It was only during the final moments that the visitors pulled away.

In the end, it is the victory that counts, and that is something Bangladesh must learn if they want to improve their disappointing Test record. At present, batting is Bangladesh’s strength, and they must look to maximise their talent, which is something they failed to do to the hilt in the Chittagong Test, which ebbed and flowed. The good news for Bangladesh is that both their openers Tamim Iqbal and Imrul Kayes are in form. But, neither of them got a hundred in the Test. This is one aspect the duo must work towards as the second Test kicks off on Friday. 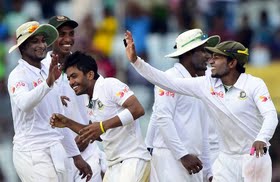 Bangladesh have a strong middle order, perhaps their best since they achieved Test status. But, the men in action have been disappointing as they haven’t converted positive starts. The foursome of Mominul Haque, Mahmudullah, Shakib Al Hasan and Mushfiqur Rahim got at least one start across the two innings, but not one of them was converted into fifty leave along a hundred. Considering the amount of experience in the middle, as well as the fact that Bangladesh are playing at home, these are hugely poor numbers. It is imperative that the experienced men stand up and deliver for their team.

The good news for Bangladesh is that Sabbir Rahman, their hero in the previous Test, has recovered from the stomach ache problem he was suffering from. He is a worthy batsman down the order. Spin is one area where Bangladesh could, and should look to trouble the visitors. Shakib picked up a five-wicket haul in the previous encounter. Not to forget, Mehedi Hasan claimed six wickets in his first innings on debut. Taijul Islam too had a decent Test. With no Shafiul Islam, Kamrul Rabbi will have a bigger role to play while it would be interesting to see whether Bangladesh go in with Soumya Sarkar or Shugavata Hom.

There is a big relief for Bangladesh as England have decided to rest Stuart Broad for the second and final Test of the series. Steven Finn is all set to take the place of Broad for the game. Also, Zafar Ansari will be handed his debut with Gareth Batty being left out. Adil Rashid and Chris Woakes will have to raise their games. Despite the win at Chittagong, batting remains a worry for England. Gary Balance is running out of time while Ben Duckett too did not look comfortable out in the middle. Skipper Alastair Cook and Joe Root too haven’t been consistent of late. So, Bangladesh do have an opening.