Sri Lankan captain Angelo Mathews, yet again gave a wonderful account of himself as a batsman, scoring a hundred with his team's back to the wall. During his admirable partnership with debutant Kusal Perera

Sri Lankan captain Angelo Mathews, yet again gave a wonderful account of himself as a batsman, scoring a hundred with his team's back to the wall. During his admirable partnership with debutant Kusal Perera, who registered his second fifty in his debut Test, Mathews even briefly ignited hopes of a come-from-behind victory, something which Pakistan had achieved against Mathews' side during their recent visit. However, India had enough time and energy left in the tank to withstand the defiance offered by Mathews and Perera, eventually winning the Test by 117 runs, and the series 2-1 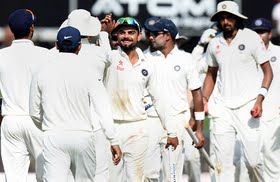 The victory, which was achieved when Amit Mishra got his first wicket of his innings by trapping last man Nuwan Pradeep plumb in front with a googly, was India's first Test series win in Lanka in more than two decades. The last such triumph was achieved in 1993, under the leadership of Mohammad Azharuddin. The series win was also Virat Kohli's first as Test captain, after having faced some frustrating times in recent matches. Ishant Sharma once again stood out for India with his fiery fast bowling, finishing with three big wickets. Ravichandran Ashwin got four to add to his second-innings fifty.

Although the 117-run triumph seems like a comprehensive win, it wasn't an easy one for India, at least not when Mathews and Perera were going strong. The game-turning moments for India came either side of the tea break. Having played almost flawlessly for his 70, Perera went for a reserve sweep, that landed straight into the hands of the fielder. Lanka went into tea on a sour note, and things only turned more bitter on resumption. India took the new ball, and in the very first over, Ishant had Mathews trapped lbw as the batsman failed to move his feet, and was hit right in front. The rest was mere formality as Rangana Herath did not offer much resistance, and Dhammika Prasad dashed back as if to avoid facing Ishant.

The day did not begin on a bright note for India as they gave a massive reprieve to Sri Lanka when Mathews nicked one behind the stumps in Ishant's very first over of the day. However, the angry fast bowler, not for the first time in the match, had overstepped. It was a massive moment as India could then have quelled Lanka's challenge very early in the day. As it turned out, the Lankan skipper went on to make India pay for the mistake. He batted resolutely, and rarely took any risks. Mathews was most impressive, leaving the ball outside off stump, knowing exactly where his stump was. He brought up a valiant century, before Ishant finally had his man.

While Mathews survived early on, there was no such reprieve in store for Kaushal Silva. He fell to a bouncer from Umesh Yadav, completely mistiming it and, in the process, handing back a simple catch. Silva lasted at the crease for 50 balls. New man Lahiru Thirimanne was low on confidence given his string of failures in recent matches. But, it seemed that he had decided to support his captain by taking on the defensive role, just like his captain. Ishant and Umesh kept things extremely tight against the duo, and the batsmen too played on the bowlers' patience. Thirimanne eventually blinked. As Ashwin was brought on, he tried to turn one on the leg side, and was caught off the leading edge, yet again by a fumbling Lokesh Rahul. Mathews and Perera then resisted wonderfully well before the latter did a Rohit Sharma, who incidentally was the catcher.