CSK vs KXIP Review: Chennai displayed all their might against Punjab

IPL 8 CSK vs KXIP: In 2014, Kings XI Punjab had a brilliant season against Chennai Super Kings. On Saturday, it was a completely different Punjab and Chennai outfit that battled it out.

In 2014, Kings XI Punjab had a brilliant season against Chennai Super Kings. Their batsmen, Glenn Maxwell and David Miller in particular took a liking to the Chennai bowling as they crossed 200 against the opponents on multiple occasions. On Saturday, it was a completely different Punjab and Chennai outfit that battled it out. Punjab were completely out of sorts with both bat and ball while Chennai were on top of their game. So good were Chennai that they never allowed Punjab any chance to get in. It was the sort of performance that has made them champions twice. 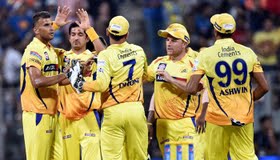 It was Chennai's splendid batting effort that put them on top. In Dwayne Smith and Brendon McCullum, they have unarguably the most dangerous openers in the business. Significantly, both have been among the runs, taking turns to either play the lead role or the supporting act. While Smith has been more consistent in getting the big runs, McCullum has provided impetus from the other end as well. On Saturday however, the roles were reversed. Smith again got the team off to a flying start, but McCullum proved his worth yet again.

Punjab's bowling attack is one that has impressed, and has been able to put opponents under severe pressure. But, against a quality Chennai batting line-up, they were found out. A lot of credit for the same should go to Chennai's batsmen for the manner in which they never allowed Punjab's bowlers to comeback. While the openers Smith and McCullum stood out, Chennai would be pleased with the fact that their skipper MS Dhoni finally hit rollicking form. He was found wanting in a couple of games. Ravindra Jadeja also played a cameo, but Suresh Raina's failures would be a worry.

Punjab were under pressure chasing, but it must be said that they came up with a extremely poor batting effort. Right from the time Virender Sehwag fell cheaply, they needed seemed to have a plan in place. The poor form of Glenn Maxwell had been concerning them, leading to him being dropped from the game. But, it didn't make much of a difference as the others were very poor. David Miller and skipper George Bailey needed to anchor the chase following the early wickets, but they are disappointing. It was a disastrous batting effort they need to put behind very quickly.

The bowling efforts of the two teams on the day was like chalk and cheese. Punjab were extremely poor, never managing to exercise any sort of control over Chennai's batsmen. From Mitchell Johnson to Anureet Singh and Sandeep Sharma, they all struggled. Chennai's batsmen never allowed them to get into any sort of rhythm. Chennai's bowlers had an easier task since they already had runs on the board. Still, credit must be given to everyone from Ashish Nehra to Ravichandran Ashwin and Ravindra Jadeja for the manner in which they bowled. It was a Super King effort by Chennai!