Dhoni and Raina : An Inseparable Duo

On 15th August, a big piece of news was about to breakout to cricket fans across the globe. India’s greatest wicketkeeper/finisher, and India’s one of the best T20 players were about to bid adieu to the game. Both of them had more than one thing in common. They made their India debuts around the same time, batted together on hundreds of occasions, have been an integral part of CSK setup since the inception of IPL, and are best friends off the field.

While MS made his debut late in 2004, Raina broke into the Indian side in mid 2005. Soon MS cemented his place in all three formats, but Raina became a regular in limited overs arena only around 2008-09. Together, they formed a dynamic finishing duo batting at No. 5/ No. 6, and also a damage control pair when the top order would fall quickly. Another interesting piece of trivia that binds them together, is regarding their respective last test matches. In 2014, when Dhoni played his last test, he informed Raina about it the night before, and also gave him his test jersey. Raina would go on to play the next test, which would later become his last as well ! 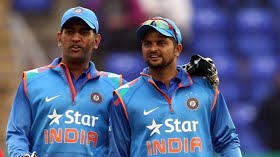 Raina, on the other hand, was the best T20 player in India at one point. His career highlights include a 120 on test debut against Sri Lanka (2010), 101 against South Africa (2010 T20 World Cup) making him the first Indian player to hit a century in T20 internationals, crucial 30s against Australia and Pakistan in quarter final and semi final respectively in 2011 World Cup, 100 against England (2014), and a match winning 110 against Zimbabwe (2015 World Cup). Although he wasn’t considered the best against the moving ball on bowler friendly pitches, all of his seven international hundreds came outside of India. A great fielder, also used to chip in with some handy offspin, he truly was a great asset to the Indian side over the years.

Having said that, we don’t have to wait too long to see them in action together, as both of them will play for CSK in IPL starting next month.