A look at some interesting happenings from Day 4 of the Colombo Test at the Sinhalese Sports Club (SSC).

Rohit falls before a break, again
Rohit Sharma, not the first time in his career, gave his wicket away after getting a start. He played a very good knock, and looked the most accomplished of all batsmen in the team on day four. Even as the others were struggling, Rohit was in complete control of his innings. He drove and pulled with control, and reached his half-century with ease. He had reached his 50 with four fours and a six. Without any addition to the score however, he fell as he mistimed a pull from Dhammika Prasad, only to be caught in the deep. Lunch was only minutes away. This was not the first time Rohit had been caught off guard just before a break, and knowing his lack of concentration issues, it won’t be the last either.

The confrontation – Part 1
Ishant Sharma, the last man in, was greeted by a barrage of bouncers by Dhammika Prasad. In the 76th over of the Indian innings, as India were looking to as many as possible, Prasad delivered a short one at the lanky bowler. He ducked under it, and smiled at the bowler, but he clearly wasn’t pleased with the short bowling he was facing. He took a single off the next ball, and as he jogged past Prasad, he repeatedly pointed towards his helmet, hitting it as if to indicate that how dare he bowl bouncers at him. When Ishant again returned on strike, Prasad ensured he delivered a bouncer, and glared at Ishant. It was a no ball, because the bowler had overstepped by a big margin. The commentators actually felt that the no-ball was delivered intentionally. 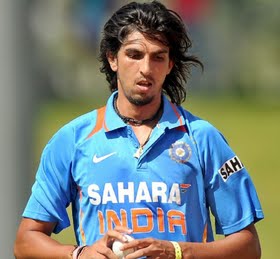 Even as Prasad and Ishant were in an animated discussion, Dinesh Chandimal walked in, and decided to brush past Ishant. He also seemed to have some words to say to the Indian fast bowler. This only further enraged Ishant. The umpires had to step in to control the unruly situation. The drama ended as Ashwin, possibly distracted, was out to Prasad off the last ball of the over. Even as Ishant ran towards the pavilion to get ready to bowl, Prasad had some words to say to him.

The confrontation – Part 2
A fired up Ishant came in to bowl, and he was clearly not prepared to back down. He got Upul Tharanga in the very first over of the innings, and celebrated very vigorously, giving the batsman a head-shaking send off. The more agitated send-off was of course reserved for Chandimal, who had brushed past him earlier in the innings. After Virat Kohli caught him on the rebound from Lokesh Rahul, Ishant banged his head with his hand multiple times as Chandimal walked past him. It was a highly volatile day of cricket, not helped by the hot and humid conditions on offer.