How about an IPL for the women’s cricket team?

India’s greatest ever women’s cricketer Diana Eduljee has hit out at the BCCI for its biased attitude towards the eves as opposed to the men. It is really sad to hear the plight of Indian women’s cricket at present.

India’s greatest ever women’s cricketer Diana Eduljee has hit out at the BCCI for its biased attitude towards the eves as opposed to the men. It is really sad to hear the plight of Indian women’s cricket at present. Although the ICC merged men’s and women’s cricket so that they are governed by one cricketing body in a country, women’s cricket in India hasn’t benefited much since the Indian cricket board has not been too keen on promoting women’s cricket in the game, and instead has only concentrated on the men’s game. 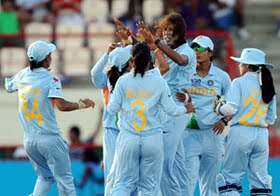 With the Women’s World Cup being held in India, this is the right time to analyse the current state of Indian cricket. Unfortunately, the signs are not too great. There has been little or no promotion by the BCCI over the mega event that has begun in India. Some of the centres chosen for the games also show how ill-treated women cricketers are in our country. Would a male cricket World Cup match have been held at the Bandra Kurla Complex in Mumbai or the MIG Club in Bandra, Mumbai? With due credit to those in charge of the stadium, the fact is that our male cricketers have never played an international match at these venues. So, imagine what kind of facilities would be available for the female cricketers.

In one of her recent interviews, Eduljee also stated how she spotted Indian women cricketers walking from the hotel to their stadium. This itself demonstrates how poorly women’s cricketers are treated in India. It is a really sad state of affairs which needs to change. After all, like their male counterparts, even the female cricketers are representing the country. Being so, Mithali Raj deserves as much respect as M S Dhoni. For a start, it was good to see her in a commercial, but that doesn’t signify a turnaround in the fortunes of women’s cricket in the country.

What Mithali and co need is for money to flow into the game, and for more sponsors to come in. For this to be done, the BCCI needs to diligently promote the game around the country. While the IPL per se isn’t a great concept, it would be perfect for women’s cricketers, for it would bring in the much needed moolah into the game. The Indian cricket board has all the money in the world so there is no reason why they shouldn’t utilise it for the betterment of female cricketers. After all, looking after the female cricketers is the responsibility of the BCCI, just like they take care of the men’s side.

It is crucial that women cricketers in India are paid decently if not as handsomely as India. One in not sure whether this already in place, but pensions must be handed out to female cricketers who have represented the country. As of now most the women’s cricketers in India are part of the game only because they love it. But to encourage girls to become the next Diana Eduljee or Mithali Raj, it is important for their parents to know that there is enough money in the game for their daughters to make a career out of the sport.