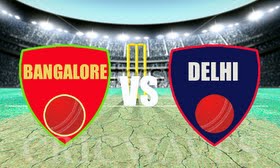 They did let go some off their big names like Gayle and KL Rahul, only to replace them with Brendon McCullum and Quinton de Kock. Even though they have quality international bowlers in Woakes, Umesh Yadav and Yuzvendra Chahal, none apart from Umesh has really made an impact in the tournament so far.
The batting continues to rely heavily on the performances of the big names and there is very little to talk about once a couple of those big names fail to fire. Given the nature of the tournament and the high stakes of the franchise owners, it is very difficult for teams to back a constant playing XI. However, it might make sense for skipper Virat Kohli to give more responsibility to Mandeep Singh and Sarfaraz Khan.
Delhi, on the other hand, have had too many up and down performances already and need to get some sort of stability from at least three or four players, to have any impact on the tournament. So far, Rahul Tewatia and Rishabh Pant have put in consistent performances while the others have had the odd contribution.
The 90 odd scores by Jason Roy seemed to have set the ball rolling for them but that wasn’t the case as they fizzled out of 129 all out in their previous game. The bowling form of Mohammed Shami, Chris Morris and Shahbaz Nadeem have also not done any good to them.

Virat Kohli 92 not out in the previous game was the first instance of him remaining not out in an unsuccessful chase in eight seasons of the IPL.
Umesh Yadav became just the second bowler to take two wickets of the first two balls of the innings in IPL. Praveen Kumar did it against Chennai back in 2011
In Delhi’s previous fixture, Mohammed Shami conceded only 12 runs of 15 balls against all other batsmen, whereas against Andre Russell he went for 40 runs of nine balls, which included six sixes