A complete team effort saw Mumbai Indians clinch the Champions League T20 for the second time after they defeated the spirited Rajasthan Royals in a high-scoring final at Delhi.

The pitch at the Kotla surprised everyone by becoming a batsman’s paradise. Mumbai Indians showed quite a lot of urgency in the middle overs to end up with a massive total after being put into bat first by Dravid. The start they got wasn’t spectacular with the first 10 overs yielding only 60 runs. Sachin Tendulkar playing in his last T20 looked good scoring consecutive boundaries off Watson before getting bowled by the same bowler in the 5th over. Dwayne Smith, the man in form smacked 44 from 39 balls before he lost his off stump in a slog sweep off Pravin Tambe. Mumbai Indians were pegged back at 77 for 2 in 11.3 overs at this stage. 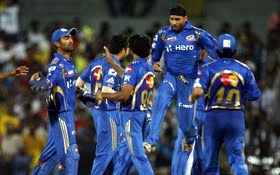 Skipper Rohit Sharma took the initiative of stepping up the gas for his team with a cameo of 33 from 14 balls with 3 fours and 2 sixes. Mumbai were heading towards a good total of around 180 but lost the key wicket of Kieron Pollard with nearly four more overs to go. Glenn Maxwell, the millionaire cricketer of the Mumbai Indians came up with an absolute blinder striking the ball cleanly from the start to score 37 in 14 balls with 4 fours and 2 sixes. Dinesh Karthik chipped in with 15* from 5 balls as Mumbai Indians finished on a high with a dream total of 202 for 6. Mumbai blasted as many as 121 runs in the last 8 overs as the Rajasthan Royals’ bowling attack was completely deflated. Leggie Pravin Tambe was the only Rajasthan Royals’ bowler to come up with respectable figures of 4-0-19-1.

Rajasthan Royals were written off from the contest even before their innings had begun. But the pair of Ajinkya Rahane and Sanju Samson had other ideas. With the pitch playing really good, the two youngsters played their shots freely on the up. Samson went onto race away to a fifty in just 23 balls while Rahane wasn’t that bad scoring his fifty in 37 balls to keep the tempo going.

In the 12th over, Mumbai Indians were rescued by Pragyan Ojha who had Sanju Samson (60 from 33 balls with 4 fours and 4 sixes) slicing a big hit to short thirdman. The Royals were well set at 117 for 2 when Samson departed. The 15th over saw the match slip away from Rajasthan as their power hitter Shane Watson perished slogging Harbhajan with the score at 137 for 3. A well set Rahane (65 from 47 balls with 5 fours and 2 sixes) holed out as well off Harbhajan Singh to trigger a collapse. Rajasthan Royals slipped from 155 for 3 in 16 overs to 169 all out in 18.5 overs.

Harbhajan Singh used his doosra liberally to help himself to 4 for 32 to get the Man of the Match award while Kieron Pollard took three cheap wickets in the end. Like Tendulkar, Rahul Dravid too failed in what was his last T20 innings. Dravid was quite selfless though by dropping himself to no.8 to give way to the better hitters in his team. The veteran came in with his team sliding towards a defeat and was bowled by a Nathan Coulter-Nile yorker in the second ball that he had faced.

Mumbai Indians’ consistent performer with the bat – Dwayne Smith was named as the Player of the Series.

Toss and Teams: Rajasthan Royals have won the toss and asked the Mumbai Indians to bat first in the Finals of CLT20 2013 at the Feroz Shah Kotla in Delhi. It is a crucial toss to win for Rajasthan as the pitch being dry will assist the spinners and in the second half will help the batsmen if the dew sets in.