IPL 2021: I have given 120% to this franchise every time, says RCB skipper Kohli after loss to KKR in Eliminator

Royal Challengers Bangalore (RCB) skipper Virat Kohli stated that he has given his 120 percent for the franchise on every occasion. RCB were knocked out of the Indian Premier League (IPL) 2021 following the loss in the Eliminator to Kolkata Knight Riders (KKR) in Sharjah on Monday.

RCB batted first after winning the toss but only managed to post 138 for 7 on the board. Kohli top-scored for the franchise with 39 off 33 but yet again he failed to carry on after getting a start and lost momentum after the powerplay. Kohli was one of Sunil Narine’s four victims on the day.

RCB bowlers fought hard in defence of the total, with Harshal Patel, Mohammed Siraj and Yuzvendra Chahal all claiming two wickets apiece. However, they did not have enough runs to defend. Shubman Gill, Venkatesh Iyer, Nitish Rana and Narine all contributed 20s as KKR got home in a chase that got slightly tense towards the end 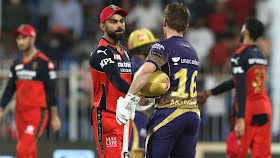 The loss for RCB marked the end of an era for the franchise as Kohli had announced that he would be stepping down as captain after the IPL 2021 season. Speaking after the defeat to KKR, Kohli stated, "I have tried my best to create a culture here where youngsters could come in and play with freedom and belief. It is something I have done with India as well. I have given my best. I don't know how the response has been, but I have given 120% to this franchise every time, which is something I will now do as a player.”

"It is a great time to regroup and restructure for the next three years with people who will take this ahead," he further added.

Kohli also reiterated that he would to turn out as a player for RCB till he retires from the IPL. He is the only player who has played for only one franchise since the beginning of the T20 league. "Yes definitely, I don't see myself playing anywhere else. Loyalty matters more to me than worldly pleasures. I would be in the RCB till the last day I play in the IPL," Kohli assured.

The legendary cricketer took over the captaincy of RCB from Daniel Vettori in 2013. Kohli led RCB in 140 matches, winning 66 and losing 70. Under him, Bangalore reached the final in 2016.