KXIP Vs MI: Azhar Mahmood exhibited why he is a great T20 player

Kings XI Punjab may have been knocked out of this year’s IPL. But, on Saturday’s game against Mumbai Indians at Dharamsala, they proved how capable they are of being a match-winning side

Kings XI Punjab may have been knocked out of this year’s IPL. But, on Saturday’s game against Mumbai Indians at Dharamsala, they proved how capable they are of being a match-winning side. One of the reasons why Punjab have done reasonably well in this year’s edition is because their chief all-rounder Azhar Mahmood has stood up and performed exceedingly well in a few games. On Saturday, he was at his very best, sizzling with the bat, and then chipping in with the ball, to lead Punjab to an impressive victory.

Mahmood’s superlative innings was primarily responsible for Punjab’s win. Having lost their openers Adam Gilchrist and Mandeep Singh early, they needed someone to stand up and take on the mighty Mumbai bowlers. In T20, attack is often the best form of defence, but not every batsman is capable of coming up with blistering knocks that can unsettle the opposition. Mahmood undoubtedly possess that talent and, against Mumbai, he demonstrated why he is rated so highly in the T20s in spite of his age. Mahmood played some smashing shots and even took the best of Mumbai bowlers to task during his blazing innings. 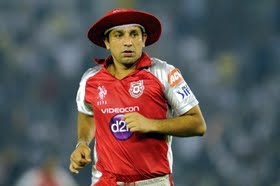 While Mahmood was in top form with the bat, Shaun Marsh’s steady innings was also significant in Punjab maintaining their superiority throughout the innings. Marsh is not a giant hitter of the cricket ball, but what he does very well is find the boundaries by the hitting the ball in the gaps, and also rotates the strike frequently, not allowing the opposition to build any sort of pressure. While the contrasting knocks by Mahmood and Marsh saw to it that Punjab were always in the hunt of ending with a competitive total, Manan Vohra’s smashing came took them to a massive score.

For once Mumbai weren’t in top form with the ball. The absence of Mitchell Johnson was definitely felt, and matters became worse of them as Dhawal Kulkarni picked up an injury after delivering just four balls. Under the circumstances, there were plenty of expectations from Lasith Malinga and Harbhajan Singh. And while the Sri Lankan pacer did pick up a few wickets, he did give away a few too many runs. As for the Indian offie, he was far from effective. The fact that Mumbai used eight bowlers was proof of how poor they were on the day.

Mumbai were no good with the bat as well. After a disastrous over with the ball, Glenn Maxwell proved that he was an overrated selection as the most expensive buy at this year’s auction, falling for a duck. Mumbai could never recover from that calamitous start. Four of their batsmen got out in the 20s, an indication that they possibly weren’t taking this game serious since they have already qualified. As for Punjab, all their bowlers were top class. All of their bowlers, (including Gilchrist!), were among the wickets. In the end, they deserved to win.

Turning point of the game: The 148-run partnership between Marsh and Mahmood when Punjab batted.