Many are questioning Ishant Sharma’s selection for the tour of South Africa in the wake of his poor form.

Many are questioning Ishant Sharma’s selection for the tour of South Africa in the wake of his poor form. While his backers are pointing towards his experience, his detractors state that he has had a terrible 2013, and the decision to take him to South Africa may prove to be disastrous for the team. As Ishant gets another opportunity to redeem himself, we take a closer look at his struggles.

Overall record: In 51 Tests, Ishant has picked up 144 wickets average 38 with only three five-wicket hauls. In 68 ODIs, he has grabbed 96 wickets averaging 31 with an economy rate of 5.7. 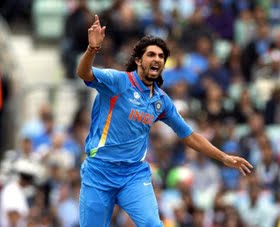 Tests in 2013: Ishant has featured in only four Tests this year, all of them during the home series against Australia. He managed only a total of seven wickets across the four Tests averaging a disappointing 38. In the first Test at Chennai, he went wicketless. Ishant had figures of 0 for 59 in the first innings and bowled only three overs in the second innings. He managed only one wicket at Hyderabad – 0/45 in the first innings, and 1/5 in five overs in the second.

Ishant’s most impressive effort of the series came at Mohali, where he bowled 30 overs in the first innings for his three wickets and conceded 72 runs. He struggled again in the second innings, going wicketless and conceding 34 runs in his nine overs. Thankfully for Ishant, he did reasonably well on his home ground at the Feroz Shah Kotla. In the final Test of the series, he had figures of 2 for 35 from 14 overs in the first innings and 1 for 13 from two overs in the second. Overall, Ishant was disappointing, but the fact that India won 4-0 helped him escape criticism.

ODIs in 2013: Before the South Africa series, Ishant featured in 20 ODIs and picked up 31 wickets averaging under 30. The figures are reasonably good, but you have to dig deeper to find the problem. During the Champions Trophy in England, he managed 10 wickets in five games. His economy rate during the series was a major problem though. In the match against South Africa, he conceded 66 runs while picking up two wickets in eight overs. Against West Indies, he had one wicket for 43 from 10 overs. Against Pakistan, his seven overs went for 40 even as he grabbed two wickets. His best figures were against Sri Lanka 3 for 33. In the final, he conceded 36 for 2 scalps in four overs. What these stats don’t reveal is that Ishant did not earn most of these wickets. They were either tailenders, or batsmen falling while slogging.

Ishant did fairly well in the tri-series in West Indies, grabbing eight wickets in five matches averaging 26. But, then came the home series against Australia, and it all fell apart for Ishant. He featured in three matches in the series, and was miserable in all of them. At Pune, his figures were 56 for 1 in seven overs. At Jaipur, he conceded 70 runs in nine overs, without picking up a wicket, and at Mohali his figures were 63 for 1 in eight overs, 30 of those runs coming in one over.