Second-placed Delhi Capitals will look to get back on the winning track when they face fourth-placed Kolkata Knight Riders in the 42nd match of IPL 2020 at Abu Dhabi on Saturday. Well placed with 14 points from 10 matches, Delhi came up with a half-hearted effort against the ever-improving Kings XI Punjab in their previous encounter to go down by five wickets. Their opponents for Saturday, Kolkata Knigh Riders, also have plenty of work to do, as they were hammered by eight wickets by Royal Challengers Bangalore at the same venue where they will face Delhi.

Punjab’s victory over Delhi proved that the latter are not invincible, and can be brought down. Shikhar Dhawan made a record second consecutive ton in the tournament. The fact that it was still not enough for a win is an indicator of how poor the rest of the batting was. Prithvi Shaw’s good tournament has suddenly turned miserable owing to his weaknesses being exploited in the last few games. Skipper Shreyas Iyer and Shimron Hetmyer to need to make better contributions. At the same time, Delhi would be pleased that Rishabh Pant has recovered from injury, and would want him among the runs.

If their batting gets its act together, there is nothing much to worry in the bowling. Kagiso Rabada has been constantly exceptional, and if Anrich Nortje’s niggle has healed, he should make his way back instead of Daniel Sams. Axar Patel and Ravichvandran Ashwin are adeptly handling the spin department. 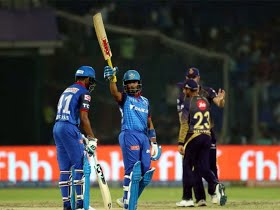 KKR will have to show exceptional mental resolve to lift themselves after being blown away by Mohammed Siraj, and managing only 84 while batting first. The entire batting line-up barring skipper Eoin Morgan fell like nine pins. The continued lack of runs from last year’s superstar performer Andre Russell has hurt the team. He also missed the last match due to injury. Dinesh Karthik and Nitish Rana have also disappointed.

In the bowling, Pat Cummins’ inability to pick up wickets is proving to be a major handicap. Lockie Ferguson has been in a league of his own since being brought in for the last two games. But, the rest of the bowling has been pedestrian.

Head-to-Head Record: Despite DC’s win in the previous meeting between the teams, KKR lead them 13-12 in the head-to-head battle.

The pitch is a highly challenging one for batsmen if the team is batting first. KKR managed only 84 against RCB. There is a lot of help for the bowlers. Chasing is the way to go

Being a day game, the conditions will be hot, with temperature in the mid-30s.