Right from the start of the series, India had made it clear that they would be going into the Test matches adopting the five-bowler theory, since they felt that was the best way they could win matches.

Right from the start of the series, India had made it clear that they would be going into the Test matches adopting the five-bowler theory, since they felt that was the best way they could win matches. As a result, they conveniently dropped Cheteshwar Pujara, who until then was a constant fixture at number three. All seemed to be going well for India as Shikhar Dhawan and Lokesh Rahul scored tons in the first two Tests, and Ajinkya Rahane got one at number three in the second innings at the P. Sara Oval. But, the injury to Dhawan and Murali Vijay meant Pujara was forced to be brought in as an opener at the SSC. The rest, as they say, is history. 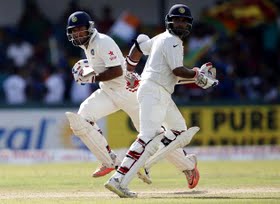 Although he hadn't done a lot in the last couple of Test series', the decision to keep him out was still slightly unfair, as the other batsmen in the team, barring Ajinkya Rahane, had done as poorly on those tours. But, now that he was back in the playing eleven, he had a point to prove. And, he did so very much, with a fantastic hundred, on a surface where most other Indian batsmen struggled, apart from lower-order bat Amit Mishra. He slowed excellent defence, which had been breached while playing on surfaces abroad. Pujara was getting starts while playing away from home, but wasn't able to get on.

While Pujara's success opening the batting at the SSC is a definite positive for India it has, at the same time, also put India in a selection quandary. What do they do now with the five-batsmen policy when all the players are fit. While Wriddhiman Saha or Naman Ojha could alternate between the keeping duties depending on form and injuries, they will have a tougher task deciding upon the top five batsmen. While Pujara and Lokesh Rahul opened the innings at the SSC, Colombo, Murali Vijay and Rahul had done so in the second Test. In the opening Test, Shikhar Dhawan had opened the batting with Rahul. This means, India have had three different opening combinations in three Tests.

Unless there are injuries, the problem for India would arise as to how pick the batting side. Things have got tougher with all the abovementioned names succeeding during different phases of the tour. Dhawan began with a hundred in the opening Test, his second in as many games, before getting injured. Rahul, who was a failure in the first innings, responded with a man of the match performance in the second, scoring a hundred, and keeping wickets as well in place of the injured Saha. Vijay, who had failed in the first innings, came up with a crucial 82 in the second. Ajinkya Rahane continued his great form with a hundred.

The man who then comes into focus is Rohit Sharma. He tasted failure in the first Test, but delivered under extreme pressure, and responded with a crucial half-century in the first-innings at the P. Sara Oval. In the second innings as well, he chipped in with a nice cameo as India looked to build a match-winning total. Of all the players, Virat Kohli has tasted the least success in recent times. But, he is the Test captain, and India's most prolific run-scorer across formats in recent years. So there is no question of leaving him out unless his former dips drastically. The tough choice would then be between dropping either of Pujara, Rahul or Rohit, none of which would be fair, but a tough choice will have to be made