England must rethink their team combination for Mumbai

Following yet another Test loss, at Ahmedabad, England look a far shadow of the side which climbed to the number one ranking in Tests on the back on some competent performances at home.

Following yet another Test loss, at Ahmedabad, England look a far shadow of the side which climbed to the number one ranking in Tests on the back on some competent performances at home. Their weaknesses against spin were quite clearly exposed against Pakistan in the UAE and their numero uno ranking was history post the defeat at home to South Africa. As such they were expected to struggle in Te sts against India. The series is only one Test old, but if the early indications are anything to go by, England are in for a rough time. 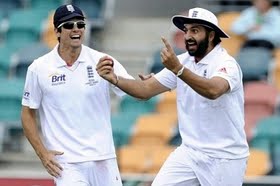 Even though the visitors fought back bravely in the second innings at Motera, they still have to make massive improvements if they want to compete at Mumbai. For sure, a few team changes can be expected. England would be handicapped by the fact that Steven Finn would miss the second Test since he hasn’t recovered from a thigh strain. Finn might not be as effective on the sub-continent as he has been in helpful conditions back in England. Still, with his pace he could have given the bowling attack the cutting edge that seemedperceptibly missing during the Motera Test.

One change that can be definitely expected is seeing Monty Panesar instead of Samit Patel. The latter was picked for the opening Test consider his all-round skills. One can’t blame him for the lack of big scores since he was unlucky to be given out lbw in both the innings, but his bowling was, without doubt, easy meat for the Indians. Not even one delivery of his troubled the Indian batsmen. Great things cannot be expected of another left-arm spinner, Panesar. At the same time, being a frontline spinner, Panesar can be expected to do a more competent job. Also, he has toured India before, so that should help his cause.

There will be a forced change in the batting line-up, with Ian Bell flying back for the birth of his child. Bell’s absence might well prove to be a blessing in disguise for England for the middle-order bat looked out of sync in both innings at Ahmedabad. Although he hung around for a while the second time round, his first ball wild slog in the first innings was symptomatic of England’s below par effort in the match. Bell is likely to be replaced by either Jonny Bairstow or Eoin Morgan. The choice would be a tough one. While Bairstow played impressive, attacking knocks in the last Test against South Africa, Morgan has made a case courtesy some efficient ODI performances in recent matches.

Mere team chances wouldn’t be enough for England to revive their fortunes. What they need is for the batsmen to support their in-form skipper Alastair Cook and for their bowlers to provide better backing to Graeme Swann. James Anderson, Stuart Broad and Tim Bresnan managed only a solitary wicket in the opening Test. The trio needs to raise its game, as does the rest of the squad.