Live News and Ball by Ball Updates of Australia Vs India, ODI 7 at the Gabba, Brisbane

Australia finished on a high at 288 for 5 in 50 overs in the 7th match at the Gabba despite being on the backfoot for a considerable part of their innings. India had the hosts strangled at 117 for 3 in the 28th over before Michael Hussey and Peter Forrest turned the heat on the visitors with a century partnership.

The visitors would have had a terrific start but for a dropped catch from Rohit Sharma which gave an early life for Matthew Wade off Zaheer Khan’s bowling. After being put under a check by Zaheer and Vinay Kumar, the Australian opening pair of David Warner and Matthew Wade finally started to break the shackles. Australia was going strongly at 70 for no loss when David Warner (43 from 46 balls with 5 fours and a six) flicked an Irfan Pathan delivery in the air to Sachin Tendulkar at mid wicket.

In the 20th over, Zaheer Khan in a second spell got the important wicket of an under pressure Ricky Ponting who whipped him in the air but straight to Pathan at deep squareleg leaving his team at 83 for 2. In the next few overs, India sustained the pressure surprisingly through Suresh Raina’s part-time off breaks. It was another part-time off spinner Rohit Sharma who got the next breakthrough when the left-handed Matthew Wade (45 from 67 balls with 2 fours and a six) patted a return catch to him with the hosts at 117 for 3 in the 28th over.

The homeside almost lost their fourth wicket soon when Michael Hussey was beaten by the turn from Suresh Raina and had his backleg dragging onto the crease with MS Dhoni whipping the bails off in a flash. The third Umpire Bruce Oxenford pressed the red button but soon conveyed that he had hit the wrong button. Michael Hussey was dramatically called back by an over enthusiastic Billy Bowden. An upset MS Dhoni was in animated discussion with the Kiwi Umpire and that was a moment that changed the momentum of the match completely in the favour of the hosts. 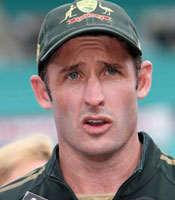 India were punished severely by Michael Hussey after that as he was lucky in whatever he did. He and Forrest collected half centuries to take Australia towards a solid total. It was only in the 44th over, that Michael Hussey got out when he heaved a slower one from Irfan Pathan into the hands of deep mid wicket. By the end of the same over, Virat Kohli took a good forward diving catch at deep mid wicket offered by a flick shot from Peter Forrest (52 from 71 balls with 3 fours) off Pathan.

Australia was 223 for 5 and went onto smash 288 for 5 by the end of the 50th over with Daniel Christian pulling off a cameo of 30* from 18 balls with 5 fours. David Hussey remained unbeaten with another valuable score of 26* from 20 balls with a four and a six. For India, the best bowler was Suresh Raina, who at one stage had figures of 8-0-23-0 though his last two overs went for 21 runs! Irfan Pathan managed to get 3 for 61. The brightest part of the Indian bowling was Umesh Yadav as he clocked speeds of around 152.5 kmph! It was pity that Dhoni brought him too late in the bowling attack and gave him just the 7 overs!

Toss and Teams: Australia under Ricky Ponting have won the toss and elected to bat first in the 7th Match of the Commonwealth Bank Series against India at Brisbane. Michael Clarke, who was expected to play this match, seems to have not recovered yet from his hamstring injury leaving Ponting to lead the hosts again.

Australia make one change with Clint McKay pulling out with illness and his replacement is going to be swing bowler Ben Hifelnhaus, who was the top wicket taker in the Test Series! India have made one change with Zaheer Khan replacing R Ashwin. MS Dhoni informs that Virender Sehwag is left out because of back spasms.

Pitch Report of the Gabba, Brisbane: The pitch at the Gabba has a whitish look with not much of grass cover. But it is expected to be a hard track with good amount of bounce. The conditions are very humid and cloudy which means that there will be swing in the air for the new ball bowlers.