A lot of boundaries missed: Dhoni after tantalizing loss to Bangalore

MS Dhoni gave Bangalore a mighty scare as he nearly chased down 26 runs needed by Chennai in the last over.

MS Dhoni gave Bangalore a mighty scare as he nearly chased down 26 runs needed by Chennai in the last over. Dhoni slammed Umesh Yadav for three massive sixes and a four but with two needed off the last ball, failed to make proper contact, as a result, Chennai fell agonizing short by one run, in the chase of 162.

Bangalore skipper Virat admitted after the game that Dhoni gave them a massive scare. "A whole lot of emotions. We were outstanding with the ball until the 19th over mark. On the last ball, that was the last thing I would have expected to happen. Feels good to win a game by a small margin. MS did what he does best and he gave us all a massive scare," Kohli said during the post-match presentation ceremony. 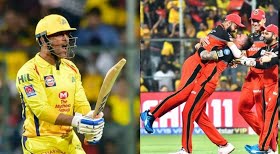 On the other hand, Dhoni, who remained unbeaten on 84 from 48 balls, was of the view that a few missed boundaries earlier in the innings cost them. "A lot of boundaries were needed, right now you can calculate, one run there, and two runs there and we just lost by one run. But you can also say we missed some boundaries," Dhoni said.

Williamson in awe of David-Jonny

In the other game earlier in the day, the Jonny Bairstow-David Warner combination once again led Hyderabad to victory against Kolkata whose season is going from bad to worse.

The Hyderabad openers brought up their fourth 100-run stand on Sunday as they beat Kolkata by nine wickets. Post the game, Sunrisers skipper described them as outstanding.

"The two at the top have been doing it all season, hopefully, they can continue, they were outstanding. It's been an absolute pleasure to watch the two at the top hit the ball like that," Williamson said after Hyderabad 9-wicket win after both slammed fifties in the victory.

He also admitted their departure would be a massive loss. Bairstow is leaving to join England team on April 23 while Warner also won't be available towards the latter stages of the Indian T20 Cricket 2019 .

"Without a doubt, Warner and Bairstow will be big losses, they are world class players, we knew at the start of the tournament that we will lose them at the back end of the tournament and new guys will come in then," Williamson added.