India gained firm control of the deciding Test against Sri Lanka at SSC in Colombo, as the hosts' batting once again faltered in the face of a hostile attack and a responsive pitch. Defending a huge score

India gained firm control of the deciding Test against Sri Lanka at SSC in Colombo, as the hosts' batting once again faltered in the face of a hostile attack and a responsive pitch. Defending a huge score, Ishant Sharma continued his great run, getting Upul Tharanga in the very first over, squaring up the southpaw and having him caught behind. He went on to send back the attacking Dinesh Chandimal as well, as the batsman pushed at a ball hard outside off stump. The ball carried to Lokesh Rahul at third slip, who again couldn't hold on, but Virat Kohli took the rebound. At the other end, Umesh Yadav had already sent back Dimuth Karunaratne, also caught behind, to leave the hosts tottering at 2 for 2. Only rain or a spectacular last-day batting effort could now save Lanka. 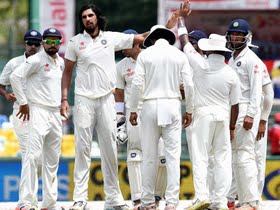 Earlier, enterprise, good luck and doggedness combined as India's batsmen set Sri Lanka a highly improbable target of 386 to win. Having gained a crucial first-innings lead of 111, India had swiftly crumbled to 7 for 3 in their second innings. But, rain came to their rescue late on day three. And, their fortunes were much better when play resumed on Monday. The middle and lower order came up with crucial contributions, Rohit Sharma and Ravichandran Ashwin making fifties, Stuart Binny narrowly missing out on one, and Amit Mishra and Naman Ojha chipping in with 30s as India recovered to post 274 all-out.

Having been precariously placed, the start was going to be extremely important for India. This is where Kohli and Rohit did a good job. While Rohit managed to gauge the pace of the pitch well, Kohli struggled. However, both managed to survive the initial tough period, and took the lead past 150, which was a psychological boost. Kohli however once again fell playing a poor push to a ball well outside the off stump. Thankfully for India, Rohit stayed steady, and crucial runs came India's way, which eased the pressure not only on India, but himself. His partnership with Binny, who was luckier more than he was impressive, took India towards an impregnable position.

Rohit was driving and pulling with ease, and looked set for a big score, when he mistimed a pull, and gave his wicket away, yet again before an interval, lunch this time, and the lucky bowler was Dhammika Prasad. Binny could have been out more than once during his stay. He jumped out of the crease, and almost got stumped. In between though, he played some noteworthy strokes as well, at times even bringing his wrists into play while hitting on the on-side. He would have been eager to get a fifty to prove his worth to the team, but got a good ball to be dismissed one short. Prasad once again got a set batsman to edge behind the wicket, and Upul Tharanga did the rest.

For the second time in his debut Test, Ojha played a cross-batted swat to lose his wicket. But, this time he can be forgiven as he was going for quick runs, although the selection of shot could have been better. Ojha did impress though creaming a couple of boundaries through the off-side from the middle of the bat. At the other end, Mishra continued his good form with the bat. While his solid defence remains his strength, he displayed exemplary confidence in going on to the back foot and late-cutting Rangana Herath for four. The biggest plus in the batting though was a much-needed return to form of Ashwin, who looked at ease once he got in. It can be argued that India batted on for too long, but Kohli would hope his bowlers prove otherwise.