Mumbai Indians and Kolkata Knight Riders have two of the strongest batting line-ups in the competition, and they lived up to the hype, putting up exciting batting efforts in the clash at Eden Gardens in Kolkata on Wednesday.

Mumbai Indians and Kolkata Knight Riders have two of the strongest batting line-ups in the competition, and they lived up to the hype, putting up exciting batting efforts in the clash at Eden Gardens in Kolkata on Wednesday. But, when two strong batting line-ups face each other, the chasing team often has an advantage as they know what exactly is the target to achieve. Mumbai proved this theory true with a blazing batting show against Kolkata, which outshone a good batting effort by the hosts themselves. The bowlers from both sides struggled, but it was more to do with the quality of the batting sides than anything else.

While Mumbai were chasing a tough target for sure, their batting prowess came to the fore. It was mentioned in the preview to the match that the loss in the opening game should not be seen as a major setback for Mumbai, as it was a one-off. According, Mumbai came in and blazed away. To chase down a big target, Mumbai needed skipper Rohit Sharma to fire, and he stood up to the challenge with a brilliant stroke-filled knock. Not only did Rohit ensure that the team got off to a flying start, but he stayed till the very end, and took the team past the finishing line. It was a perfect captain's knock, and one that should revive Rohit's confidence after his recent failures.

Even as Rohit played the knock that made the difference, there were significant contributions from a couple of others as well. Mumbai pulled a rabbit out of the hat, by sending Mitchell McClenaghan in at number four. The move took Kolkata bowlers completely by surprise, and they were shell-shocked as the bowler returned to the pavilion having faced only eight balls, but during which time he smashed 20 runs with three monster hits. If Kolkata, had any hopes of a fightback, those quickly evaporated. In T20s, innovation is the name of the game, and when a move like the one made by Mumbai comes off, you look like geniuses.

The other significant contribution in the batting came from Jos Buttler. The England wicket-keeper had a poor first outing against Pune, and would have been keen to make amends. He did so by smashing 41 from 22 balls, thus ensuring that the team stayed on course for the victory. Buttler took the pressure off Rohit with the big hits, and in the end, it was all too easy for the Mumbai. A small but crucial contribution also came from Parthiv Patel. While he made made only 23, it came in a rollicking opening stand of 53 with skipper Rohit, which set Mumbai on their way in the chase. Mumbai timed their batting effort perfectly, and deservedly won. 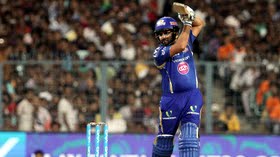 Looking back at the match, Kolkata would not be too disappointed with their batting effort. In hindsight though, they may feel that they should have aimed for 200 plus. When Gautam Gambhir and Manish Pandey were going all guns blazing that seemed a possibility, and later Andre Russell also raised hopes of a same. But, a couple of cheap wickets toward the end, cost them a few runs, and they fell a little short of 200. Perhaps, it made the difference in the end. But, the way Mumbai batted, they could have chased down any score. Kolkata must accept humbly that they were second best on the day, and must look ahead from here.