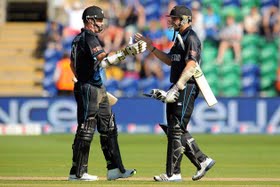 Pitch report : The pitch on Sunday did not have as much bounce as Mills hoped for before the match, though it did provide decent movement off the seam. With the rain likely freshening things up, expect a similar surface, as long as the weather will allow the match to happen at all.

New Zealand may have mixed feelings about the soggy finish to the first match, but for the hosts, the disappointment of not completing that game is double. With an inexperienced opposition at 13 for 1 chasing a tall score, Sri Lanka will feel they were strong favourites to win the match.
Their plans for developing young players have now been complicated. Chief selector Sanath Jayasuriya had suggested to Sunday Times he would like to rest at least one of the senior batsmen in match two if the first game was won, reasoning, "If they are not at full strength I don't see why we should be at our full strength". With no gains made in the series yet, he will now be tempted to shelve those plans.
The hosts will at least be encouraged by the solidity of their batting. Despite a first-ball jolt and the clatter of wickets after the 35th over, Sri Lanka still managed a fine start and a fast finish. This is in part because this ODI team bats as deep as any Sri Lanka side ever has, but it is also thanks to the enduring class of Kumar Sangakkara and Tillakaratne Dilshan, who appear to be adding new dimensions to their ODI cricket at 36 and 37 respectively. A fluent Sangakkara counterattacked after the early wicket, and an out-of-touch Dilshan dropped anchor, making a valuable contribution nonetheless.
Angelo Mathews' turn as finisher will also reassure the team, after he had become unsteady in that role this year. He is batting ahead of two young batsmen whose cricket is neither well-suited to limited-overs matches nor to the positions they are being forced to bat in, and as such, Mathews will routinely have to pick up the slack until Dinesh Chandimal and Lahiru Thirimanne can become more consistent.
New Zealand, meanwhile, will hope to eliminate the waywardness that characterised their attack on Sunday. Mitchell McClenaghan had bowled excellently in his last outing against Sri Lanka, in Cardiff, but struggled for rhythm and direction in Hambantota, even if he produced the occasional fine delivery. Adam Milne was slightly more disciplined, but was also guilty of releasing the pressure Kyle Mills had built at the other end during the opening overs. Corey Anderson was also expensive, despite dismissing Dilshan in the batting Powerplay.
The cricket, again, is at the mercy of the weather, and the forecast for Tuesday is worse than it was for Sunday.
Ball by ball updates
Full Scorecard
Last Five Match Result :
Sri Lanka: WWLWW (last five completed matches, most recent first)
New Zealand: LLLLW
Match Stats :
Three out of the last four ODIs in Hambantota have been rained out
In 19 innings at No. 5, Mathews averages 50.20 at a strike-rate of 93.65 - by far his best stats for any position
Teams:
Sri Lanka team: KC Sangakkara, DPMD Jayawardene, TM Dilshan, KMDN Kulasekara, SL Malinga, BAW Mendis, HMRKB Herath, AD Mathews, RAS Lakmal, NLTC Perera, HDRL Thirimanne, LD Chandimal, MDKJ Perera, Dimuth Karunaratne, Sachithra Senanayake, Ashan Priyanjan
New Zealand team: KD Mills, L Ronchi, GD Elliott, NT Broom, IG Butler, HD Rutherford, RJ Nicol, MJ McClenaghan, AF Milne, Colin Munro, Tom Latham, Andrew Ellis, Corey Anderson, James Neesham, Anton Devcich