Newly appointed bowling coach of South Africa, Allan Donald, has claimed that accepting the post for his native country was not a difficult decision at all and he said ‘yes’ immediately.

Newly appointed bowling coach of South Africa, Allan Donald, has claimed that accepting the post for his native was not a difficult decision at all and he said ‘yes’ immediately.

South Africa (CSA) named Kirsten the head coach of the Proteas recently and the former left-handed opener wanted Donald to look after his bowlers. 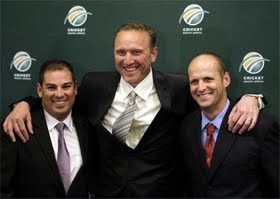 Donald has been working with ’s cricket team as their bowling coach since the limited overs series against earlier this year and had a verbal commitment with them to carry on with the job even after the .

Meanwhile, he has been getting offers from as well but Donald did not have to think for long about accepting the post with South Africa.

Donald hopes that the people back in New Zealand will not think bad about him as it happened all of a sudden.

He said, "I really hope that people in New Zealand don't think that I was shopping around. These things came out of the . Australia rang me out of the blue and that threw a little curveball. Then South Africa: from nowhere, Gary phoned me and that was another curveball".

Donald and Kirsten have played a lot of cricket together for South Africa during the 1990s and 2000s. The understanding between the two could prove to be extremely beneficial for South Africa at the highest level of the sport.

The former fast bowler expressed that he always wanted South African cricket because he grew up playing cricket in his native country. Although, he has been working for the Black Caps as well, his major objective was to get the post from CSA.

"It's something I've been wanting to do for a long time with the South Africans, getting involved in their system. But I was ready to go to New Zealand, that was the bottom line", he said.

South Africa’s cricket team has been under much in the recent past as they have failed to cross the line in big matches on a number of occasions. It remains to be seen whether the new management team can change the fortunes of Proteas cricket or not.