Rahul Dravid has picked our brains, seen what we're doing and replicated it in India: Greg Chappell

Former Australia captain Greg Chappell has claimed that Rahul Dravid, the current head of the National Cricket Academy (NCA), picked "Australian brains", replicated the style in India to turn young cricketers into match-winners. Incidentally, Dravid was the captain for most of Chappell's tenure as Indian coach (2005 to 2007). The Aussie legend resigned from his post after India were dumped out of the 2007 World Cup in the first round.

Speaking to cricket.com.au, Chappell said in praise of Dravid, "India have got their act together and that's largely because Rahul Dravid has picked our brains, seen what we're doing and replicated it in India and with their much larger (population) base.”

He also warned that Australia’s current domestic structure might not be good enough for young cricketers to move up the ladder to international cricket. Chappell explained, "Historically, we've been one of the best at developing young players and keeping them in the system, but I think that's changed in the last couple of years. I'm seeing a bunch of young players with great potential who are in limbo. That's unacceptable. We cannot afford to lose one player. 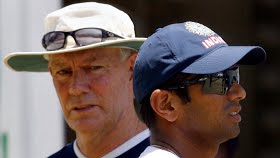 The Aussie legend also spoke about India’s famous Test series win Down Under despite losing most of their big names to injuries. A number of newcomers who featured in the series were mentored by Dravid.

According to Chappell, "When you look at the Indian team that played in the Brisbane Test that had three or four fresh players, and everyone said, 'This is India's second XI' those guys had played (extensively) for India A. And in all sorts of different conditions, not just in India. So when they get picked, they're not tyros at all, they're quite hardened international cricketers.

"We picked Will Pucovski out of Shield cricket. Will has hardly had a game outside Australia. That's the difference," Chappell signed off.

India defeated Australia 2-1 in the four-match series Down Under. The victory saw fringe players like Rishabh Pant, Shardul Thakur, Mohammed Siraj, Washington Sundar and T Natarajan rising to the challenge.