Kumar Sangakkara scored a 16th ODI century to set up a massive 180-run victory for hosts Sri Lanka over South Africa in the first ODI at the R Premadasa Stadium in Colombo.

Kumar Sangakkara scored a 16th ODI century to set up a massive 180-run victory for hosts Sri Lanka over South Africa in the first ODI at the R Premadasa Stadium in Colombo. The 35-year-old scored a career best score of 169 which came in just 137 balls with 18 fours and half a dozen sixes. 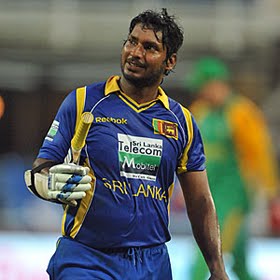 Sri Lanka courtesy of Sanga’s domination piled up 320 for 5 after being put to bat first by AB de Villiers. It wasn’t a slam bank knock from Sangakkara as he worked his way to 66 in 91 balls before shifting gears dramatically to score 103 more runs in just 46 balls! Also amongst the runs for the hosts were Upul Tharanga with 43 and Mahela Jayawardene with 42. For the Proteas, Morne Morkel bowled well for his 10-2-34-2.

South Africa chasing a huge target lost a wicket in the very first ball of their innings with Malinga yorking Colin Ingram. With none of the batsmen able to spend any sort of time in the middle, the visitors were bundled out in 31.5 overs for 140. Thisara Perera and Rangana Herath picked three wickets each.