The 2010 Champions League T20 took place in South Africa. This time 10 teams took part in the event. They were Central Districts, Chennai Super Kings, Guyana, Lions, Mumbai Indians, Royal Challengers Bangalore, South Australia, Victoria, Warriors and Wayamba. The teams were divided into two groups of five each. Group A had Chennai, Warriors, Victoria, Wayamba and Central Districts. The remaining five teams formed Group B. Like the previous year, the first round comprised a total of 20 games. The four teams which then qualified for the semi-finals were Chennai Super Kings, Royal Challengers Bangalore, Warriors and South Australia.

First semi-final: In the battle of IPL teams, CSK took on RCB in the first semi-final. Winning the toss and batting first, Chennai amassed 174 for 4. Suresh Raina was the star for Chennai with an unbeaten 94 from only 48 balls, an innings which featured six sixes. Opener Murali Vijay contributed an important 41 from 32 balls. In reply, Bangalore succumbed to 123 all out inside 17 overs. Opener Manish Pandey was the sole batsman to make an impression with his 52. From Chennai’s side, left-arm seamer Doug Bollinger ended up with 3 for 27. 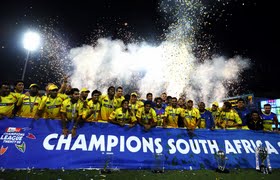 Second semi-final: Warriors faced South Australia in the second semi-final of the 2010 edition. Warriors batted first and opener-cum-skipper Davy Jacobs blasted 61 from 41 balls to get Warriors off to a blazing start. Colin Ingram made 46 from 35 and Nicky Boje stole 22 from 7 balls as Warriors posted an impressive 175 for 6 on board. South Australia were never in command during the chase. Callum Ferguson stood out with his 49-ball 71, but it was inconsequential as the rest of the batsmen failed, and South Australia were restricted to 145. For Warriors, Lonwabo Tsotsobe ended with figures of 2 for 16 from his four overs while Johan Botha also grabbed a couple.

The final: The summit clash of the season was thus contested between Chennai and Warriors at Johannesburg. The latter won the toss and expectedly decided to bat first. Their batsmen however failed to rise to the big occasion. Davy Jacobs was impressive yet again, but he was trapped in front by Ravichandran Ashwin for 34. Warriors needed much more from him. Only three other Warriors’ batsmen got into double figures. Colin Ingram made 16, Justin Kreusch 17 and Craig Thyssen 25. Warriors were restricted to 128 for 7 with Muralitharan and Ashwin sharing five wickets. The chase was rather easy for Chennai. Mike Hussey made an unbeaten 51 from 46 balls and the other opener, Vijay, fell after contributing a well-made58 from 53 balls. Chennai eased their way to an impressive eight wicket win with an over to spare. Skipper MS Dhoni remained unbeaten on 17.