Former India opener and national selector VB Chandrasekhar is no more. He was 57 and was due to turn 58 in a few days' time. There are conflicting reports

Former India opener and national selector VB Chandrasekhar is no more. He was 57 and was due to turn 58 in a few days' time. There are conflicting reports about the cause of his death. While some claim suspected suicide, others reported he passed away following a massive cardiac arrest. During a short career, Chandrasekhar featured in only 7 ODIs between 1988 and 1990, totalling a mere 88 runs. His technique was found out at the international level. However on the domestic circuit, he had a highly successful career, with 4999 runs in 81 matches. His 237 for Goa against Kerala was the highlight of his career. A qualified engineer, Chandrasekhar played in a Tamil Nadu side that featured big names like WV Raman and Laxman Sivaramakrishnan among others. He once smashed a 56-ball ton for Tamil Nadu against Rest of India, which grabbed the selectors' attention. 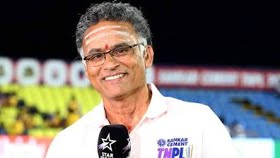 Chandrasekhar was a national selector during the time Greg Chappell was the team's coach. He later took to commentary and was considered an astute reader of the game. Suresh Raina, Harbhajan Singh, Anil Kumble and former India opener Aakash Chopra were among those to expressed shock at Chandrasekhar's death. Shocked to hear about the untimely demise of V B Chandrasekhar. Was only 57. Went away too soon. Thoughts with the family....heartfelt condolences. R.I.P.," Aakash Chopra tweeted."Very shocking to hear VB Chandrashekhar indian cricketer is no more.. very sad news .. very young to go.. rest in peace VB.. Big lose condolences to the family @CSKFansOfficial @ChennaiIPL @BCCI," Harbhajan wrote on his Twitter account. It is pertinent to note here that Chandrasekhar was instrumental in bringing MS Dhoni to Chennai Super Kings. He was even the manager of CSK for a few years. In addition, he was the owner of the Tamil Nadu Premier League franchise V B Kanchi Veerans.--By A Cricket Correspondent