Afghanistan can be proud of their spirited performance

In the end, there was no upset, and India got home without too much trouble. The same though cannot be said of the entire match between India and Afghanistan.

In the end, there was no upset, and India got home without too much trouble. The same though cannot be said of the entire match between India and Afghanistan. At more than one stage during the game, the spirited Afghans troubled India and raised homes of a surprise victory. If at all India managed to get home at the end of the day, it was thanks in main to their experience in big match conditions, and Afghanistan’s lack of it. Leave that apart, and there wasn’t really much to choose between the sides that went into battle at Premadasa. 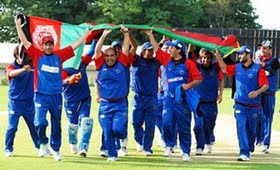 The match once again reiterated India’s woes with the top order. Virender Sehwag and Gautam Gambhir registered their umpteenth failure in a row, and this isn’t good news with the consequential games coming up. Gambhir once again fell trying to search for the ball, which makes it clear that he has momentarily lost the confidence to use his feet as it should be. As for Sehwag, he just refuses to learn from his mistakes. Despite getting out to soft shots time and again in the recent past, he just hung his bat out again at a delivery that was good but far from threatening. Thanks to the opening duo, India got off to an unimposing start in the mega tournament.

There were plenty of hopes from Yuvraj Singh, but he was making his comeback to the big stage after a while, so too much shouldn’t have been expected of him for a start. And while the left-hander did not do much with the bat, he was excellent with the ball in hand. More of that later. If at all India managed to recover from a poor start, it was thanks to that man again Virat Kohli. India’s number three continued his unending run of good with a half-century, and the team should feel blessed for the same. Suresh Raina and M S Dhoni did do a good finishing job, but had Kohli not held the innings together earlier, Afghanistan might have run India even closer.

While Afghanistan should be proud of their performance, the key to their improvement is awareness about where they went wrong. Against India, it was clearly their poor fielding effort, and indiscipline with the bowling that let them down. Not only did they drop a number of easy catches, but also misfielded what should have been simple stops. With the ball in hand, Afghanistan were tight for most part, but there were occasions where the sprayed the ball to both corners of the pitch, resulting in a number of wides, which took the pressure off India.

Despite allowing India to get away with the bat, Afghanistan fought gamely when it was their turn to take strike. There weren’t overawed for sure, for Mohammad Shahzad kept his promise and played the helicopter shot in style. Skipper Nawroz Mangal also played a breezy knock while Mohammad Nabi gave India a real scare with his 17-ball 31. Had Yuvraj Singh, who was India’s best bowler on the day, and R. Ashwin not chipped in with key wickets, Afghanistan might well have gotten closer to creating history.