South Africa struggled to end the opening day’s play at Lord’s with a modest total of 262 for 7. Things would have been a lot worse than this but for a crucial stand of 72 between JP Duminy (61) and Vernon Philander (46*) for the 7th wicket.

Update at Stumps on Day 1: South Africa struggled to end the opening day’s play at Lord’s with a modest total of 262 for 7. Things would have been a lot worse than this but for a crucial stand of 72 between JP Duminy (61) and Vernon Philander (46*) for the 7th wicket. England should fancy its chances of wrapping up the SA innings tomorrow morning as the second new ball is less than 10 overs old.

England’s breakthrough in the final session came from Graeme Swann with a well set Jacques Rudolph (42 from 103 balls) dragging a backfoot flick onto his stumps to end a 58-run stand for the 6th wicket with Duminy. The hosts were then defied by a stubborn partnership between Duminy and Philander which took the score well past 200. 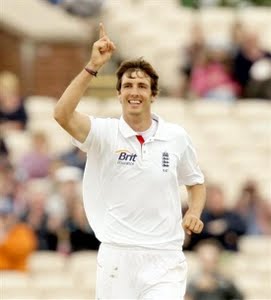 It was the third ball with the second new ball that broke the 7th wicket stand with JP Duminy (61 from 158 balls with 6 fours) edging James Anderson to Prior. South Africa got another useful stand of 27 for the unbroken 8th wicket between Vernon Philander (46* from 64 balls with 5 fours) and Dale Steyn (21* from 32 balls) before bad light put curtains to the day’s play in the 88th over. For England, Steven Finn and James Anderson did the damage taking three wickets each.

Update at Tea on Day 1: England managed to take just the one wicket in the afternoon session which saw a slight delay caused by rain. However, the hosts had South Africa still under huge pressure at 151 for 5 in 54 overs. For the Proteas, Jacques Rudolph (41*) and JP Duminy (26*) were in the middle of a fighting partnership at the time of the Tea Break. The only wicket to fall was that of AB de Villiers (27 from 47 balls with 6 fours), who edged his drive off a James Anderson outswinger to Cook in the slips.

Update at Lunch on Day 1: England have foiled Graeme Smith’s decision of batting first after winning the toss in the Third and Final Test at Lord’s by reducing the visitors to 65 for 4 in the opening session. The homeside bowlers are on a roll under the overcast conditions prevailing over Lord’s.

The first success for England came in the 9th over with Graeme Smith (14) edging an outswinging yorker from James Anderson to the Keeper. Initially, Smith was given not out but a review taken by the homeside got the decision reversed. After a slight lull, Steven Finn brought some life at Lord’s by taking two wickets in the 19th over.

First Finn got Alviro Petersen (22) gloving his rising delivery down the legside to the keeper. In the same over, Finn got one to sneak through the gate of Hashim Amla (13) to rattle his stumps with an indipper. Amla for once was very poor with his footwork and his frontfoot hardly stretched forward to block the Finn delivery.

South Africa already shaken up at 50 for 3 lost Jacques Kallis (3) just a few minutes before Lunch when the veteran was controversially given caught down the legside off Steven Finn through a Review. There was no doubt that Kallis had got his bottom glove kissed by Finn’s rising delivery down the legside but replays showed that the hand was off the handle at that time. South Africa scratched through to lunch at 65 for 4 in 24 overs with AB de Villiers (5*) at the crease along with Jacques Rudolph (7*).

As far as the composition of the two teams is concerned, England made two changes with Jonny Bairstow and Graeme Swann replacing Kevin Pietersen and Tim Bresnan. South Africa made no changes to its line up that played in the second Test.