Having lost a golden opportunity to get the better of Australia at Gabba, Pakistan head into the second ODI at Melbourne under great pressure

Having lost a golden opportunity to get the better of Australia at Gabba, Pakistan head into the second ODI at Melbourne under great pressure. At the Gabba, on Friday, they had Australia in big trouble at 78 for 5, but allowed them to recover to a challenging 268 for 9. Their batsmen, then just could stand up to the strong Aussie bowling line-up, and succumbed to 176 all-out, handing Australia the match on a platter. The imposing 92-run victory was yet another indication of the gulf between the two teams. Australia will be pleased with the manner of fight back at the Gabba.

Already 0-1 down in the series, there is further trouble for Pakistan, as their skipper Azhar Ali, and more importantly, one of the best batsmen in recent times, has been ruled out of the match owing to a hamstring injury. Earlier, Sarfraz Ahmed had also flown back home owing to personal reasons. This means, that Mohammad Hafeez has been elevated to captain out of the blue. Till a few months back, he wasn’t even in the scheme of things for Pakistan, but situations have conspired in a manner that he is not only back in the team, but will also have to lead at the MCG. 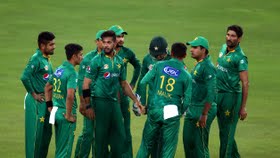 Although Pakistan’s bowlers allowed the Aussies to recover from a precarious position, it was their batting that essentially let them down. And with not Azhar, Sarfraz and Shoaib Malik as well, who hasn’t recovered as well from his throat infection, a lot will depend on Hafeez at the top. Pakistan will also need runs from the likes of Sharjeel Khan and Babar Azam, the latter in particular having struggled on this tour. Asad Shafiq’s presence should strengthen the batting. In the bowling, Imad Wasim troubled Australia with figures of 2 for 35 from his 10 overs, and chipped in with the bat as well. Mohammad Amir and Wahab Riaz need to lift their game though.

Australia would be elated that they pulled off a victory in spite of failures of key men like David Warner and Steven Smith, in the first ODI. At the same time, they would be pleased with the efforts of Matthew Wade, who displayed a mature head in a run-a-ball unbeaten 100. There was good support from Glenn Maxwell as well, who made 60. This was a significant knock for Maxwell, since his spot was under the scanner following poor displays, which even led to him being dropped. They would ideally want to avoid another batting collapse though.

The one big plus for Australia in recent times has been all-round contributions made by Travis Head. At Gabba, he opened the innings and chipped in with 39. With the ball, he sent down 10 overs conceding only 28. His presence is thus giving the Aussies greater flexibility. Their bowling effort was top class in the first match, with James Faulkner and Pat Cummins ripping through the Pakistani batting line-up. The only change should be Josh Hazlewood coming in for Billy Stanlake, who looked out of place on his debut.