Cook and Trott get hundred Set Strong Platform For England

Alastair Cook and Jonathan Trott scored unbeaten centuries and shared an unbroken third-wicket stand of 240-run as England closed day three of the first Test against Sri Lanka on 287 for two.

Alastair Cook and Jonathan Trott scored unbeaten centuries and shared an unbroken third-wicket stand of 240-run as England closed day three of the first Test against Sri Lanka on 287 for two.

The pair, who are not unused to sharing large partnerships together - as Australia will attest to - ensured that England were well on course to at least get close to Sri Lanka's own first-innings score of 400. 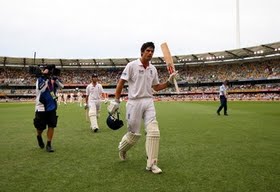 As with the first two days of the match, rain forced a delay and when play eventually got underway only one wicket fell, that of nightwatchman James Anderson, whose participation in the match is feasibly over given that he is not fit to bowl and the strong possibility that given the time lost already, England may not bat again.

His wicket went when he was caught by Mahela Jayawardene off of the bowling of Ajantha Mendis for one but Cook and Trott then took England from 47 for two - if not a crisis but a position from which Sri Lanka held the upper hand - to stumps without any further loss of wicket.

Cook reached his 17th Test century to close unbeaten on 129 in 263 balls having hit ten fours while Trott scored 125 in 219 deliveries with 11 boundaries.

He reached his sixth Test century and looks set to give his remarkable career average of 61.53 a further boost ahead of a chance to work on his bowling average if he is required to operate as a third seamer when Sri Lanka bat again.