Revealed: Why Yuvraj Singh was dropped for the Sri Lanka series

The failure to clear the 'Yo-Yo' endurance test at the National Cricket Academy (NCA) was the chief reason why Yuvraj Singh as well as Suresh Raina were chosen for the Sri Lanka ODI and T20 series, according to a report in PTI.

The Indian team undergoes fitness tests with 'Yo-Yo' endurance test being the most significant of all.

According to the PTI report, the acceptable 'Yo-Yo' score is 19.5 and upwards. Captain Virat Kohli scored close to 21 while both Yuvraj and Raina were well below and Yuvraj, it is said, hardly reached 16.

"The current team think tank, coach Ravi Shastri, skipper Virat Kohli and chairman of selectors MSK Prasad have made it clear that fitness standards are non-negotiable. 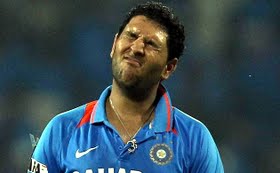 "On an average, the Australian cricketers score 21 in Yo-Yo test. Here Virat, Ravindra Jadeja, Manish Pandey regularly hit that score while others are either touching 19.5 or is hitting above that score," a BCCI official told PTI, on condition of anonymity.

"In an earlier era, when the traditional beep test was in vogue, the Indian players of the 1990's would have scored around 16 to 16.5 barring a few like Mohammed Azharuddin, Robin Singh or Ajay Jadeja.

"But now it's different as the skipper himself is hitting the benchmark, which the Australian cricket team sets it," the official added to PTI.