Just weeks after quitting the Indian coach job, Gary Kirsten has openly put his views against BCCI which has long made public its stand against UDRS.

Just weeks after quitting the Indian coach job, Gary Kirsten has openly put his views against BCCI which has long made public its stand against UDRS. 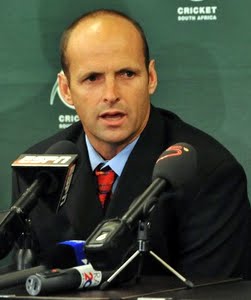 Currently causing controversy in England where India has refused permission for UDRS even though 'Hot Spot' technology would have been available.

It is evident that Master Blaster Sachin Tendulkar has been a critic of the UDRS for a long time, although he said that UDRS can be used if 'Hot Spot' is available.

The World Cup winning coach also believes that the associate members' bid for direct entry into future tournaments would be good for the sport.

Kirsten, who led India to 50-over World Cup success in April, told the repoters in a recent interview that DRS had helped improve the game, though his former employers are not in favour of it.

DRS allows teams to question two umpiring decisions per inning, and a third umpire uses the available technology, including Hawk-Eye which replicates the ball movement, to determine if the on-field officials were correct.

Personally I am very much in favour of it, I think it's a great system, the soft-spoken South African told Reuters in a hotel overlooking Singapore's Marina Bay.

"I think what it has done is that it has increased the consistency of umpiring so I am a fan of it but I know there are some negative views of it within India", said Kirsten.

The Indian cricket board (BCCI) have been strongly against the mandatory use of the DRS system, voicing concerns about the technology's accuracy despite the International Cricket Council (ICC) saying it had improved correct decisions by seven percent .

The former South African opening batsman did, however, think the technology could be adapted and teams could still be prevented from using the DRS break for strategising.

"There can be a few adjustments, I know one thing that was discussed at the (ICC) cricket committee (meeting in March) was that they might bring down two appeals per inning to one appeal so that it takes away the strategy around using DRS.

The tool is there to improve umpiring so it takes away the players using it as a strategic tool. I know that is being floated but I don't know if that has been passed yet", added the newly appointed Proteas coach.

Talking about the recent format of the World Cup, Kirsten also said it was important that smaller nations outside the top 10, known as associate members, were given help and automatic entrance into future 50-over World Cups as they offered some variety.

The ICC initially restricted the 2015 World Cup, to be held in Australia and New Zealand, to the 10 test-playing member nations only to backtrack and propose a qualifying tournament for minor nations like Ireland, who recorded memorable victories over England and Pakistan in the past two editions.

That's what World Cups are about, Kirsten, who was speaking on the sidelines of the Nomura Asia Equity Forum, said of the inclusion of the non-test playing nations.

"We play enough series against the great teams out there, World Cups are about an indication and illustration of how we are spreading the game to all corners of the globe, which is one of the mission statements I think of the ICC. So it is great that these teams are involved in an event like that. Someone like Ireland, as we know is probably the talking point, they have had tremendous success in their limited professional structures they have in place and they could really, for me, be an example to other associate countries that this is how you do it," added Gary Kirsten.

However, Kirsten was less open to the idea of day-night test matches, which some believe will help make the format more commerically attractive.

"Is test cricket in trouble?", he asked.

"The last four test series that I have watched around the world have shown it is still a great product. We must be careful in my view not to tamper with something that is working really well.

To be honest with you I would love to see test cricket being played through the day as I think that is what it stands for," Kirsten adds.