Delhi Daredevils bowlers sneaked a victory from the jaws of defeat against mighty Mumbai Indians. Despite Rohit’s responsible fifty, Mumbai Indians were 10 runs short of the target of 164 runs

Delhi Daredevils bowlers sneaked a victory from the jaws of defeat against mighty Mumbai Indians. Despite Rohit’s responsible fifty, Mumbai Indians were 10 runs short of the target of 164 runs. At one stage, Mumbai were crushing towards win when Krunal Pandya and Rohit Sharma were going strongly.

Winning the toss, Rohit decided to field first which gave us no surprise as this has been a trend in this year IPL so far. It also turned out to be a good decision when in-form Quinton de Kock was dismissed early in the inning which also led to top-order collapse. But Sanju Samson and experienced JP Duminy added 71 runs together which gave the hosts some kind of momentum to go with in the slog overs. At the end of batting power play, Daredevils were 41 for 1 but in the next two over they lost two more wicket to found themselves in crisis. At the half way mark, DD were 65 for 3. Samson scored well compiled 60 runs and brought the inning on track which was at one stage going nowhere. Duminy equally supported him and stayed not out till the end and ensured that hosts carry on the momentum provided by Samson and finishes the inning on high note. They accumulated 99 runs in the last ten overs to reach 164 runs mark.

When Mumbai Indians came out to chase, they looked comfortable for most part of the chase. But they were unable to up the ante on the crunch moment when they needed the big shots badly. Parthiv Patel got out early but Ambati Rayudu and Rohit Sharma carried the inning well. Especially Rohit, who started his inning in a flash and hit six boundaries in the first 13 balls he faced. Both batsmen attacked Negi early in the inning to put pressure on the hosts. They also looked very comfortable against the fast bowlers. But things started to change as spinners came to bowl. First Rayudu stepped out against Mishra and missed the googly and the ball hit his stumps. Then Krunal Pandaya was promoted up the order at No.4 which turned out to be good decision for the Indians for some extent. He muscle some big shots and scored runs quickly which allowed Sharma at the other end to relax and not do anything silly. But in trying to sneak a quick single, Pandaya was run out by Zaheer Khan’s direct throw. Then came the period when two leg spinners where all over the batsmen when Jos Butler came out to bat. Amit Mishra trapped him leg before for just 2 off 6 deliveries. Kireon Pollard joined Sharma at the crease but he too took too many deliveries to settle in which brought DD right back into the game. Imran Tahir and Amit Mishra hold the both ends for few overs and run rate climbed upto 12. Then Delhi took wickets on important moment to restrict Mumbai Indians on 154 runs and win the by 10 runs. 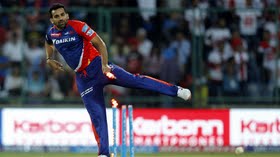 Man of the Match: Sanju Samson