With Ben Stokes-inspired wins against Mumbai Indians and Kings XI Punjab, Rajasthan Royals’ floundering campaign in IPL 2020 is just about alive. As such, they will go into their final league match against Kolkata Knight Riders at Dubai high on confidence. Both Rajasthan and Kolkata have 12 points from 13 games. However, RR have a better run rate than KKR, and thus, a big win for Rajasthan could put them in a reasonable position to qualify. Of course, with a few other sides also likely to finish on 14, it will be a tight race to the finish.

RR must do what is in their hands. Stokes has been sensational in the last two games, finally living up to his reputation. After a blistering hundred against Mumbai, he came up with a complete all-round show against KXIP, putting Chris Gayle 99’s in the shade. After picking up 2 for 32 with the ball, he then blazed away to 50 from 26.

The form of the inconsistent Sanju Samson has also returned in the last couple of matches while skipper Steve Smith and Robin Uthappa are also beginning to contribute although not in a prolific manner. Jos Buttler has played a few good knocks. In the bowling, Jofra Archer has led the attack with great gusto, and Shreyas Gopal has raised his game of late. However, the likes of Varun Aaron and Kartik Tyagi have been too expensive. 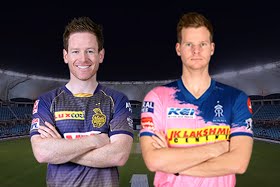 KKR go in with back-to-back defeats against KXIP and CSK, so they still have a lot of work to do going into their last league game. Nitish Rana has got two 80s and a duck in his last three visits to the crease, so one cannot complain much about him. However, Shubman Gill needs to lift his game for sure as do Sunil Narine and Rahul Tripathi. Dinesh Karthik coming in during the slog overs is working for KKR, so they do not need to float him.

In the bowling, leg-spinner Varun Chakravarthy has stood out, impressing game after game. Pacer Pat Cummins too is beginning to lift his game at last. But, Narine’s insipid bowling and Lockie Ferguson’s inconsistency after a great start will worry KKR.

Head-to-Head Record: KKR have a slender 11-10 lead over RR, earning the same by virtue of their 37-run triumph earlier in the tournament.

Considering the dew factor in Dubai, the captain winning the toss might want to bowl first, and take advantage of the wet conditions batting second.

Being a night game, the weather will be cooler, between the high 20s to low 30s.